Giving the Td5 a 2 inch lift

Having upgraded the wheels to an Italian made 8" wide Mach 5 alloy, shod in BFGoodrich's excellent KM2 (285/75R16), I next had the problem of working out how to avoid the tyres from rubbing on the wheel arches under articulation.

After lengthy research, I settled on a Gwyn Lewis supplied 2" lift kit. Not wanting to regret skimping on parts later, I went for the whole hog, including castor corrected front radius arms (hockey sticks) and double cardon prop-shafts: 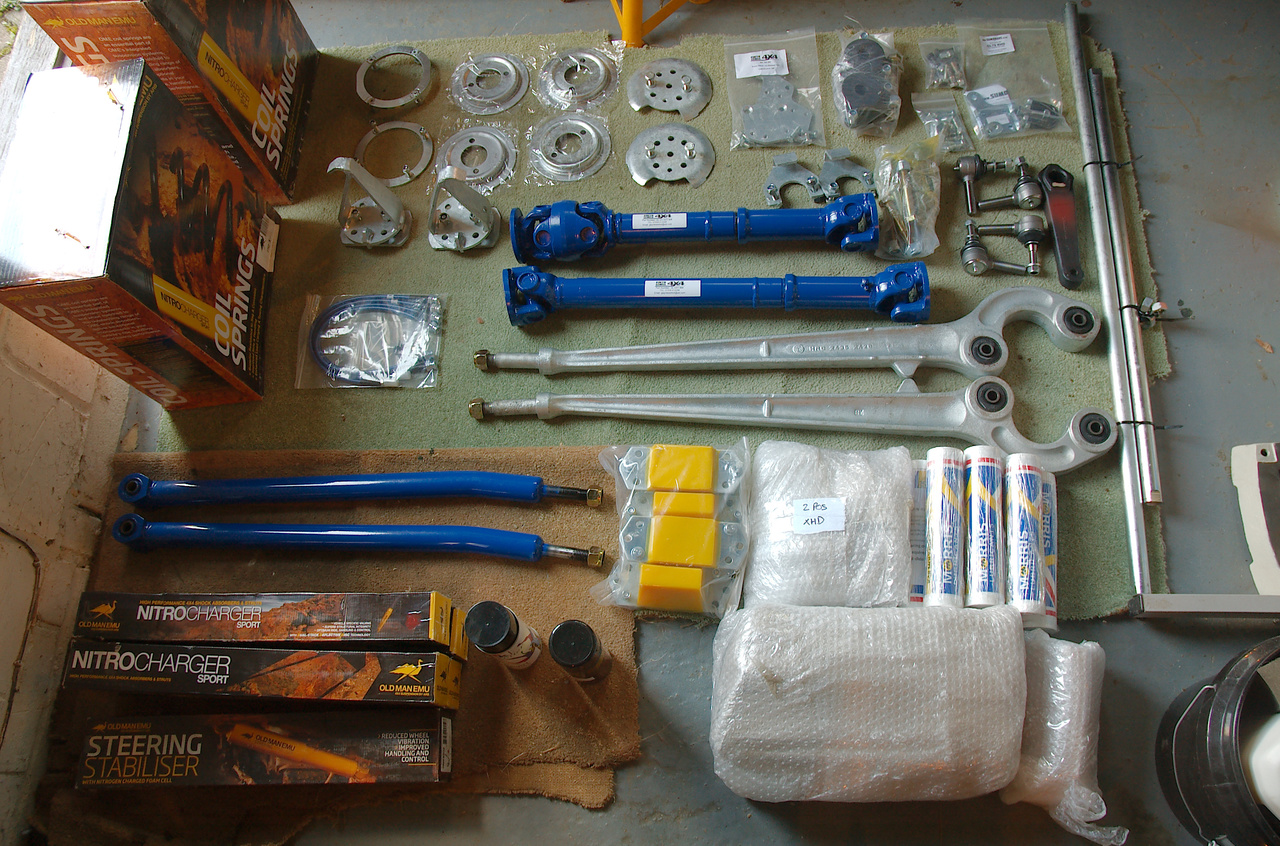 I drafted in hired help to assist with the fitment (thanks a lot Dad!), and having booked a week off work, we began at the front. The vehicle had not long been Diniltrol'd which had unfortunately resulted in a little extra work in clearing threads to be assist with undoing the old nuts. 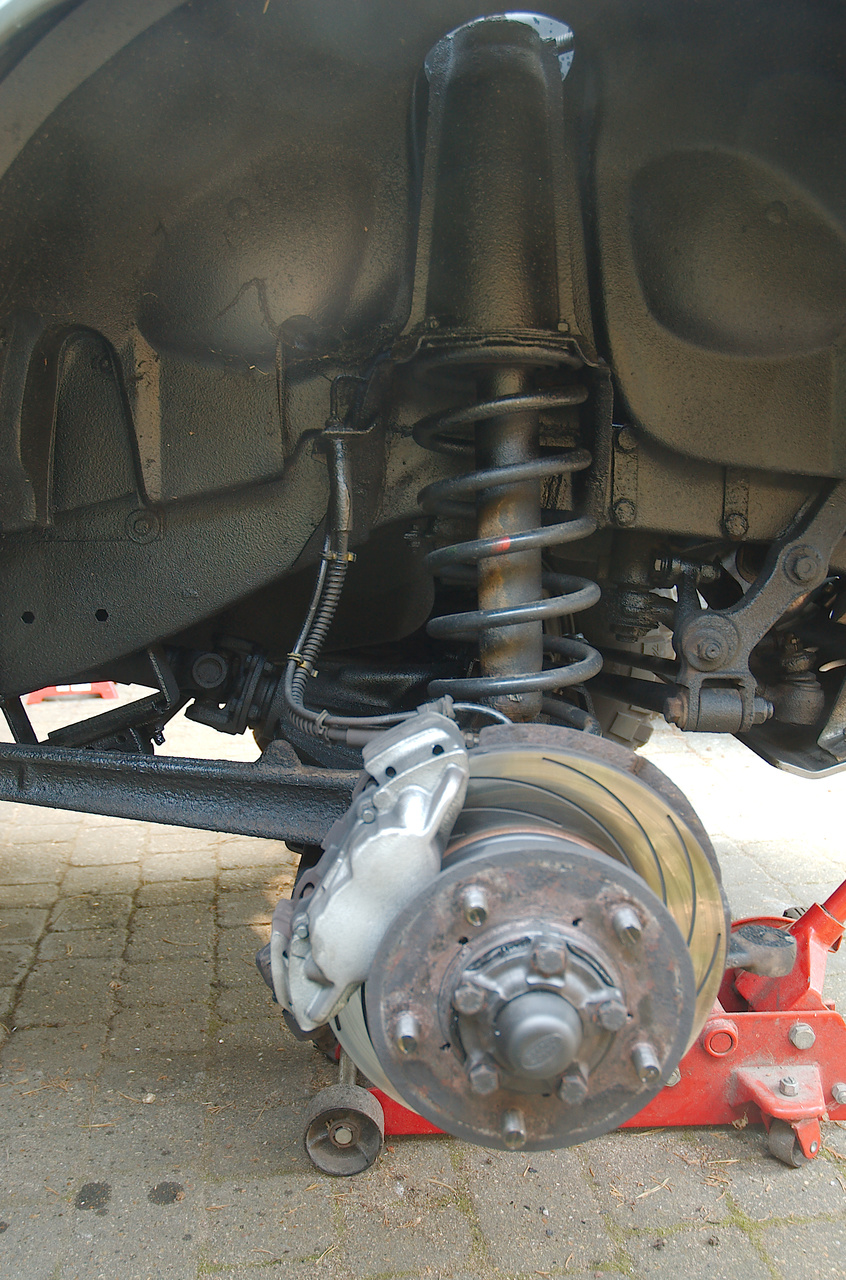 Some nuts were unbelievably tight, such as the front one holding the hockey stick in place. We were forced to use a ring spanner as the thread was too long for a standard length socket, as we didn't have a deep socket of the appropriate size. But hey, this is what 6 foot metal tubes are for right? 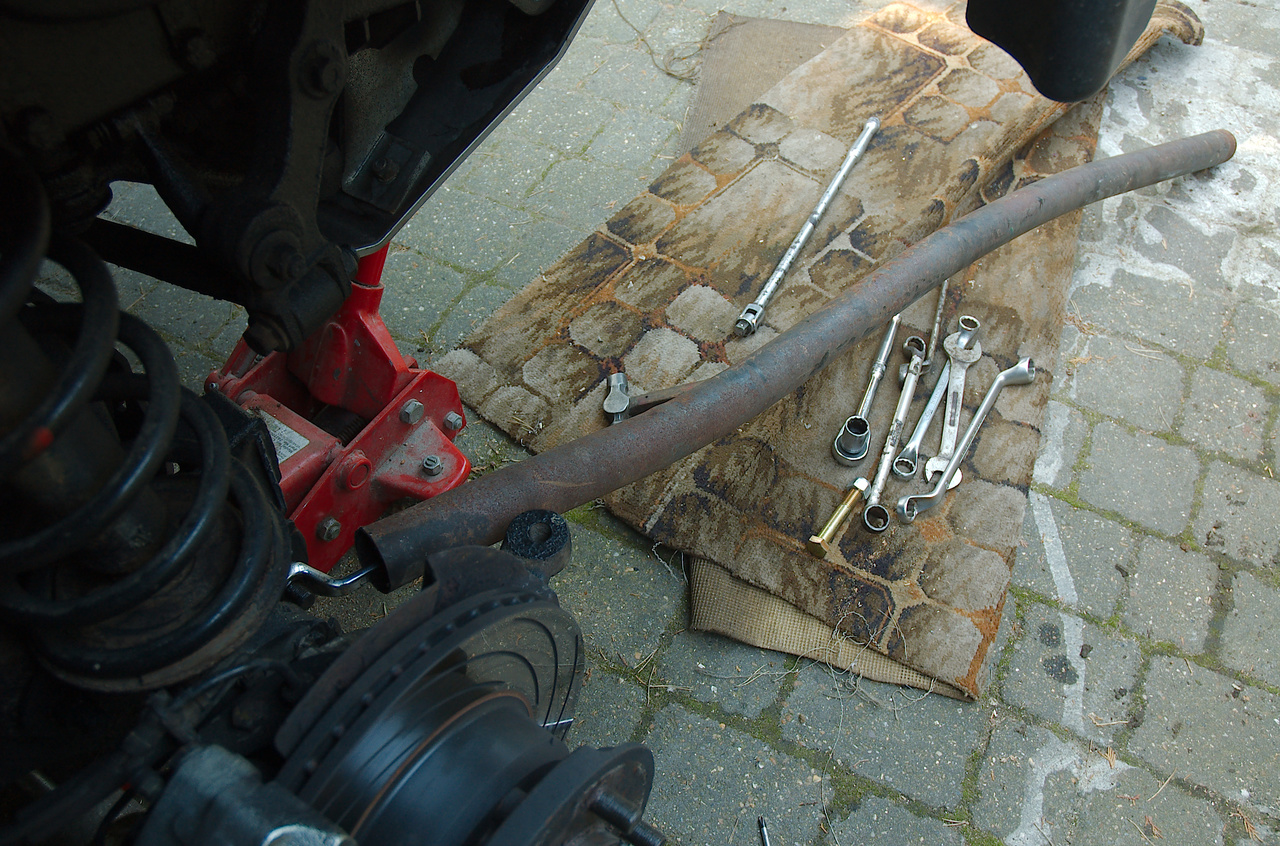 Thankfully the nut caved in before the spanner did, and we could progress. The front springs are held ion place against a turret which in turn is held by a circle of 4 captive bolts. On a 10 year old vehicle the tin worms had been busy and they sheered real easy, so bewarned if you are planning to reuse this. Thankfully we were not. 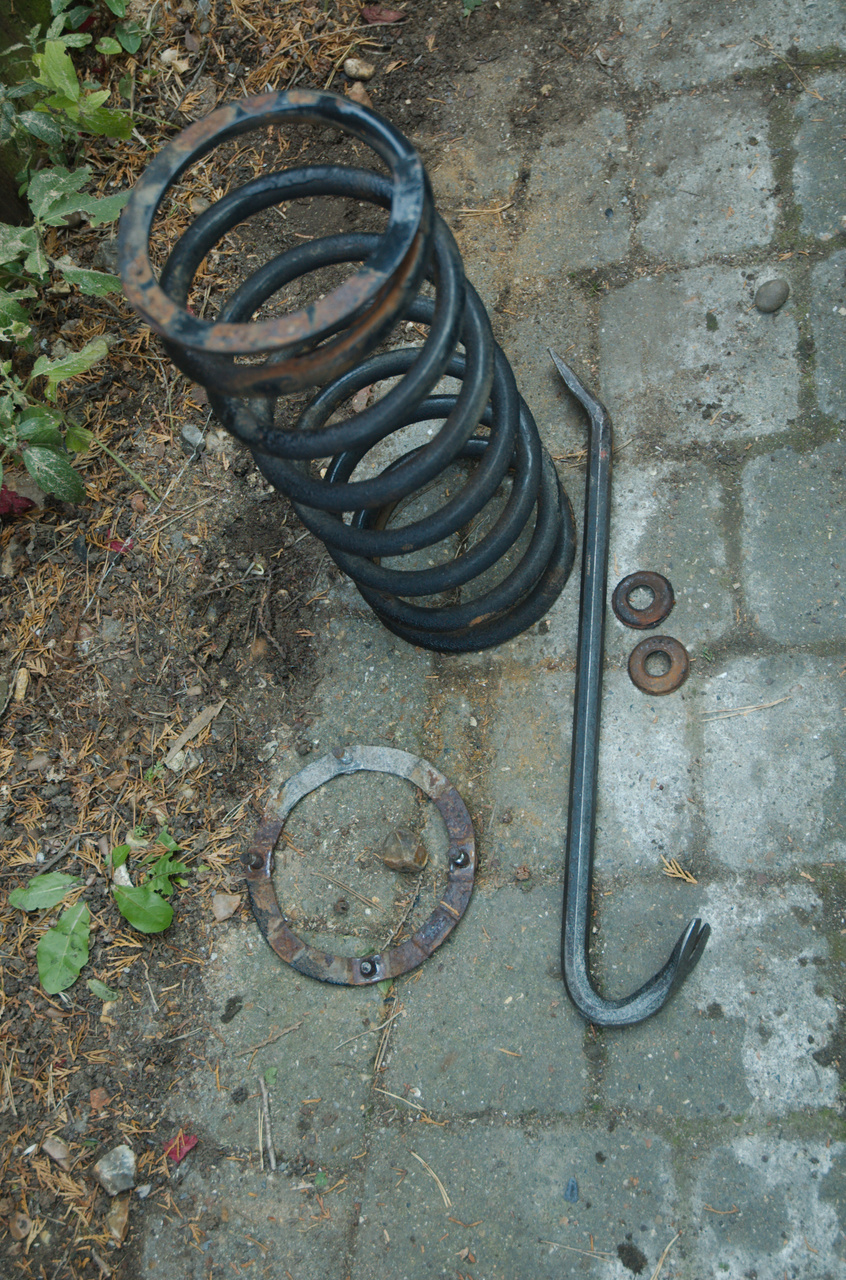 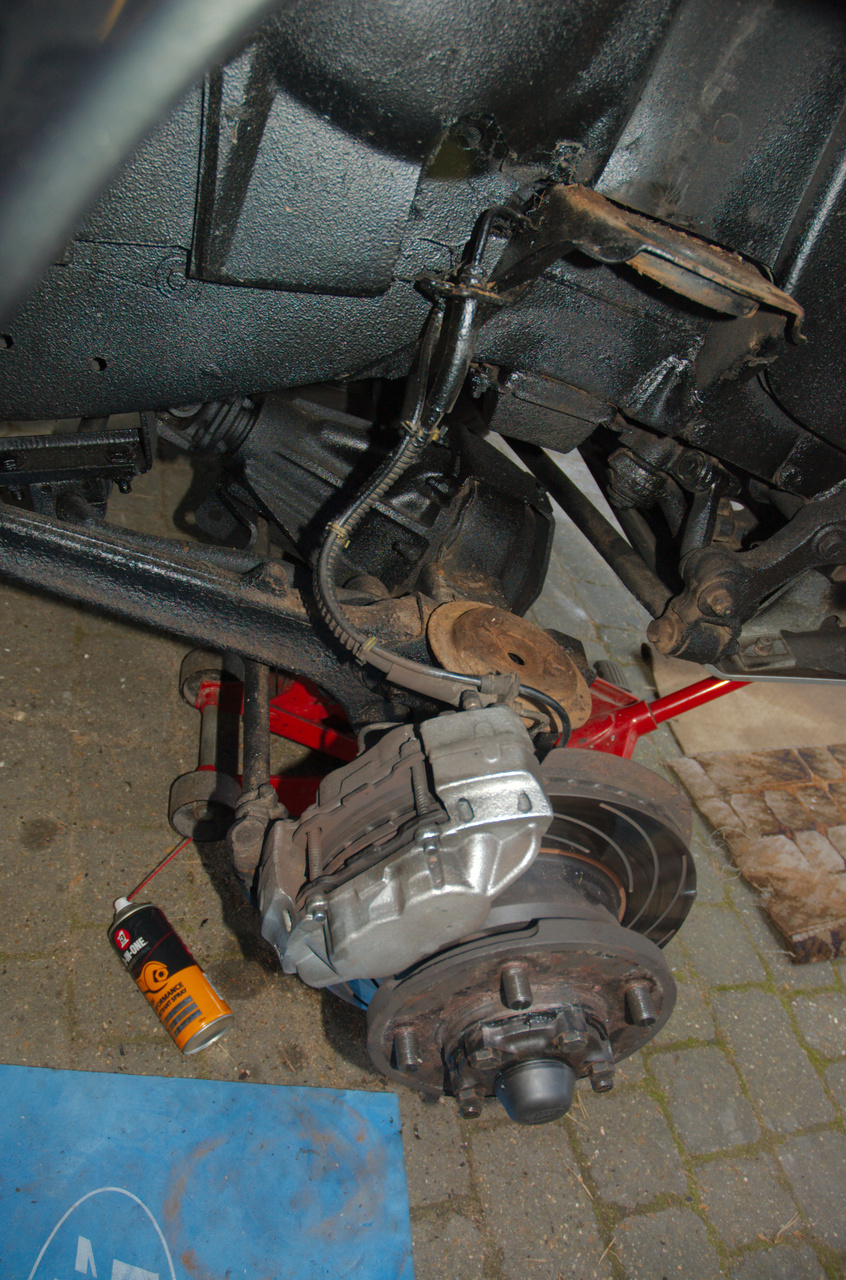 Time to replace the first spring. Gwyn had told me to check the invoice which he had marked with the front and back springs (they are different). They were even different left to right - the right being taller (at least on a RHD vehicle). Malfunction number 1 - I had left the invoice at home. Could we figure it out from inspection? 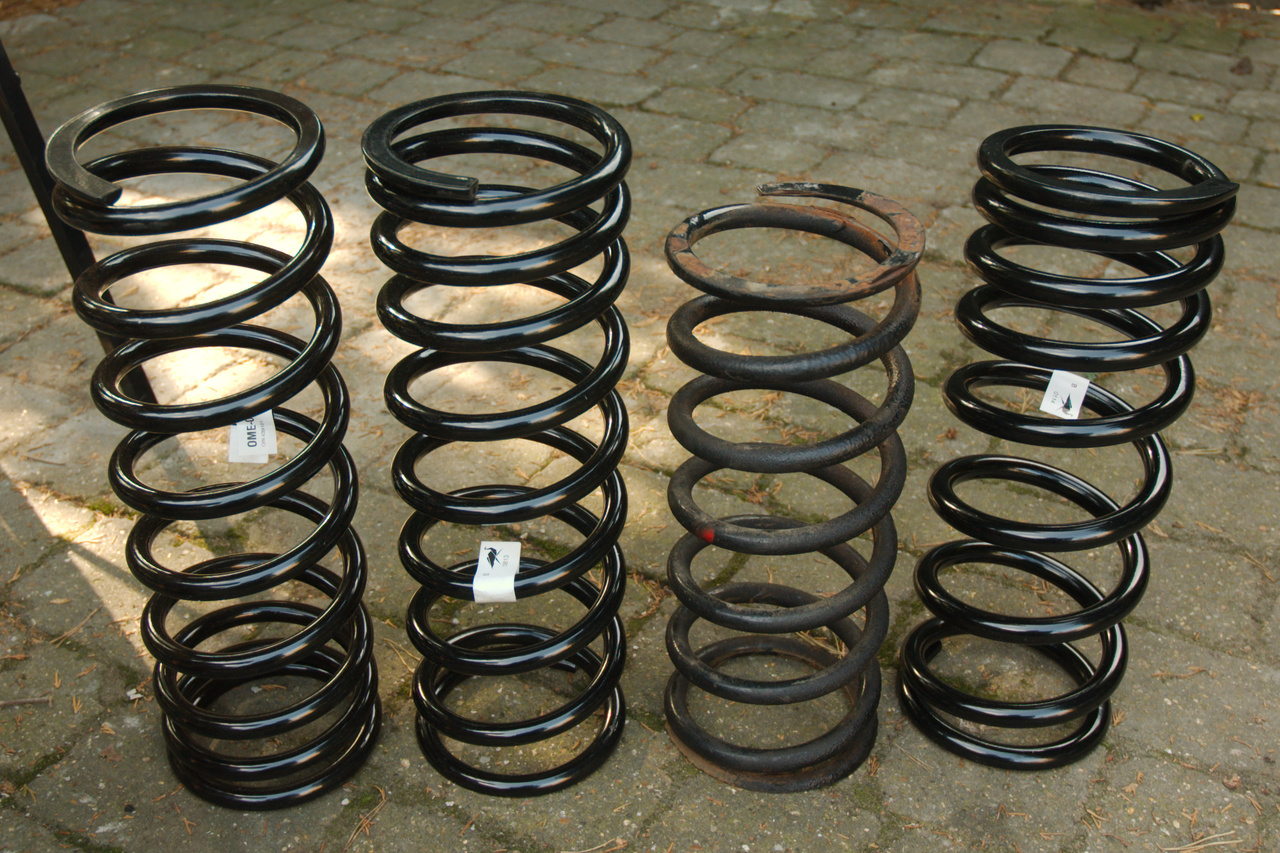 No not really, and it was Sunday so I couldn't ring Gwyn to confirm which it was. An internet search strongly suggested that:

so on we went with the 3062 set. Next up was the hockey stick - these are castor corrected to ensure that the axle 'tilts backwards' like the front forks of a bicyle - which is what causes the wheels to return to the straight ahead position. Side by side they look pretty similar:

but line the front holes up and the difference is plane to see: 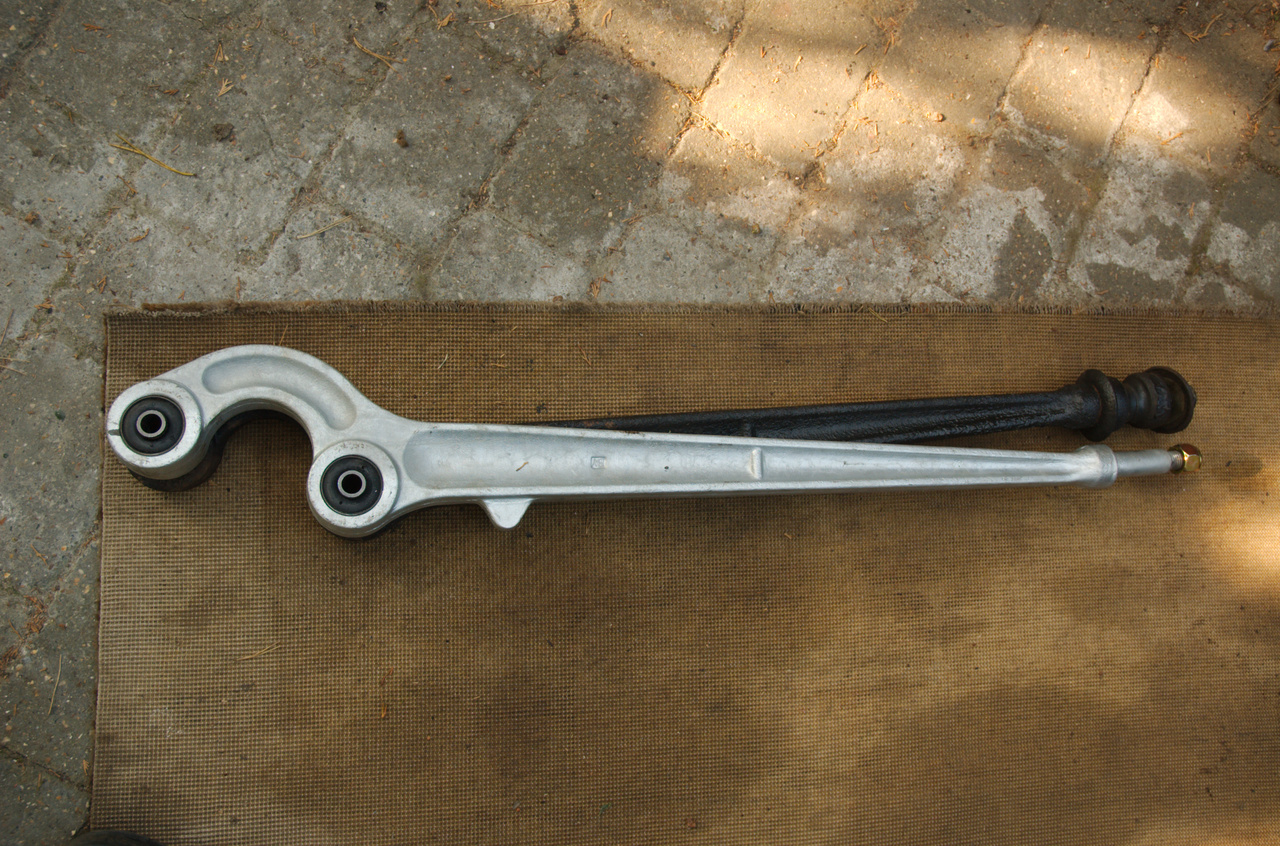 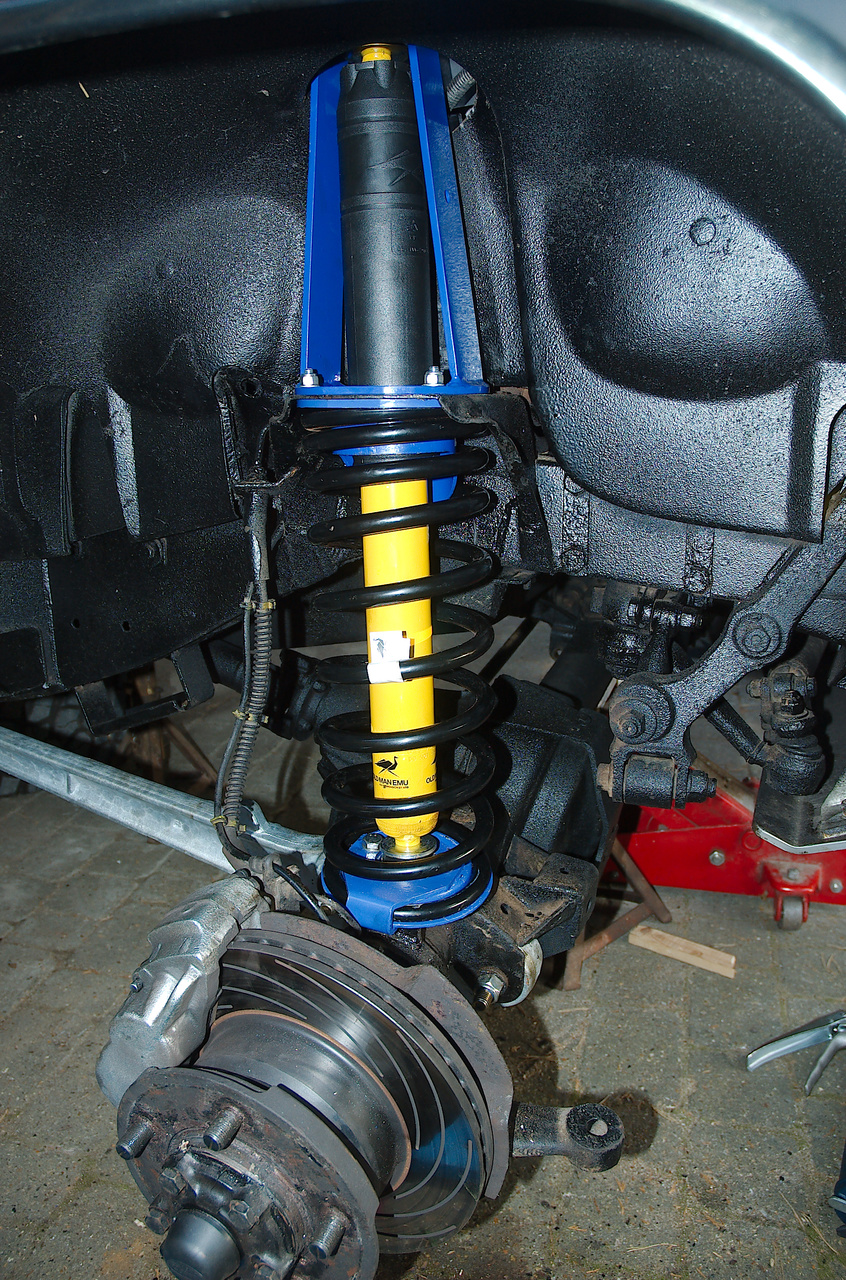 Voila - end of day one, and one corner was complete, and we have a wonky vehicle! 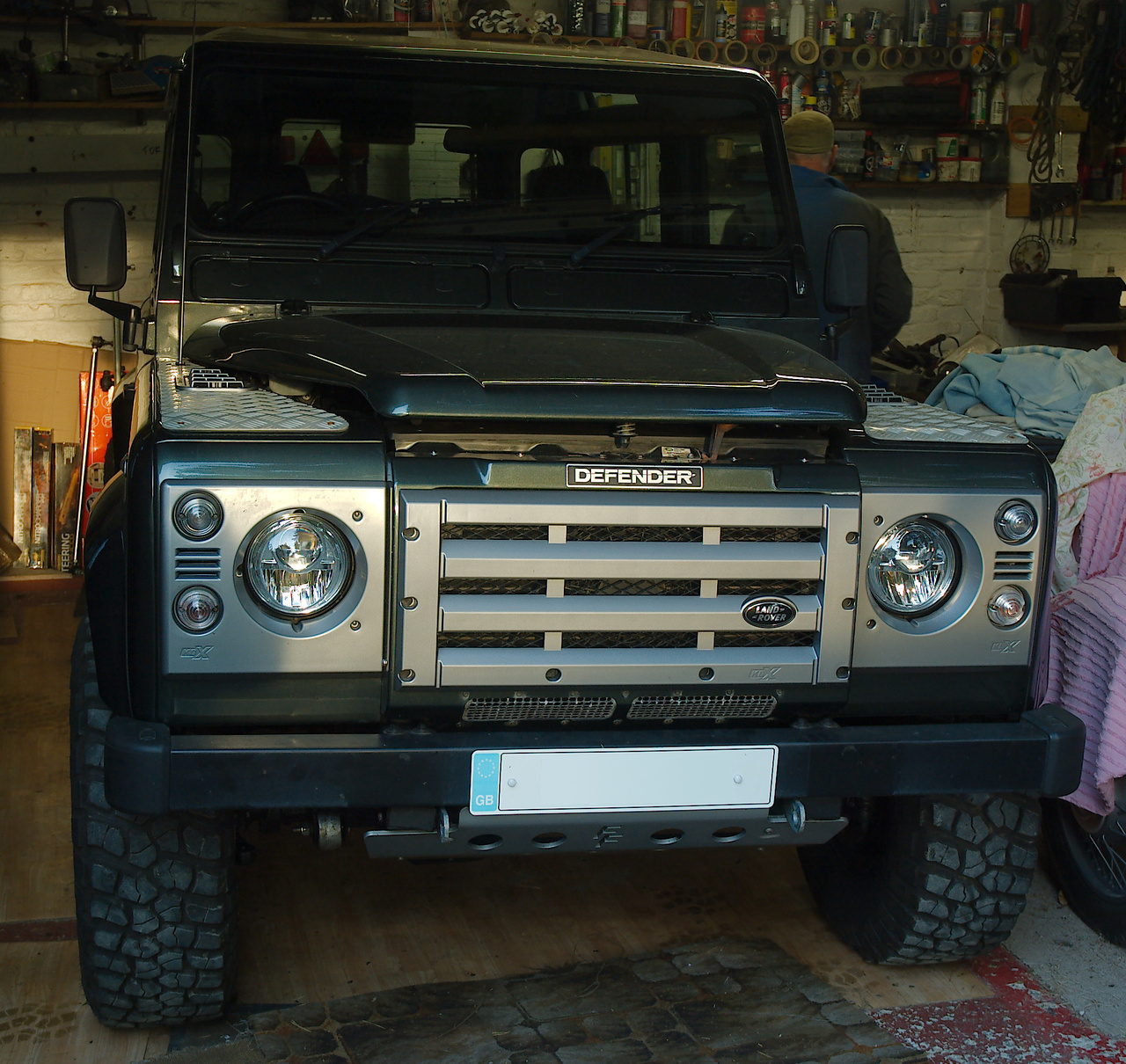 You can see here that the brake pipe it almost fully extended. Extended brake cables are included in the kit - although we have left fitting these for the garage - rounding the old unions off and then not being able to drive home would not have been an ideal scenario to find ourselves in.

We also ran into problem number one. The front turrets are raised to accomdate the +5.5" shocks - but this means you can no longer fit the cover over the turret. A problem still to be resolved... 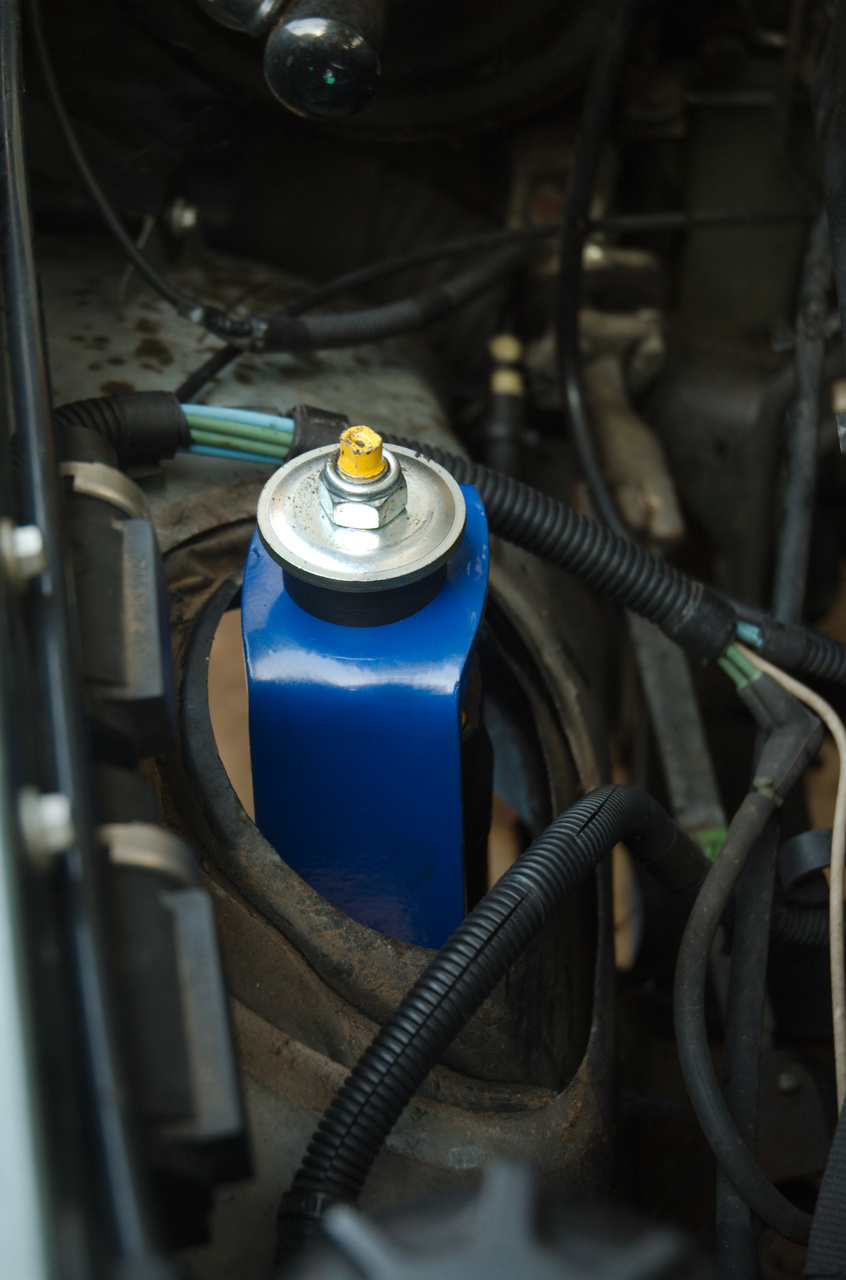 The difference between the side which was done: 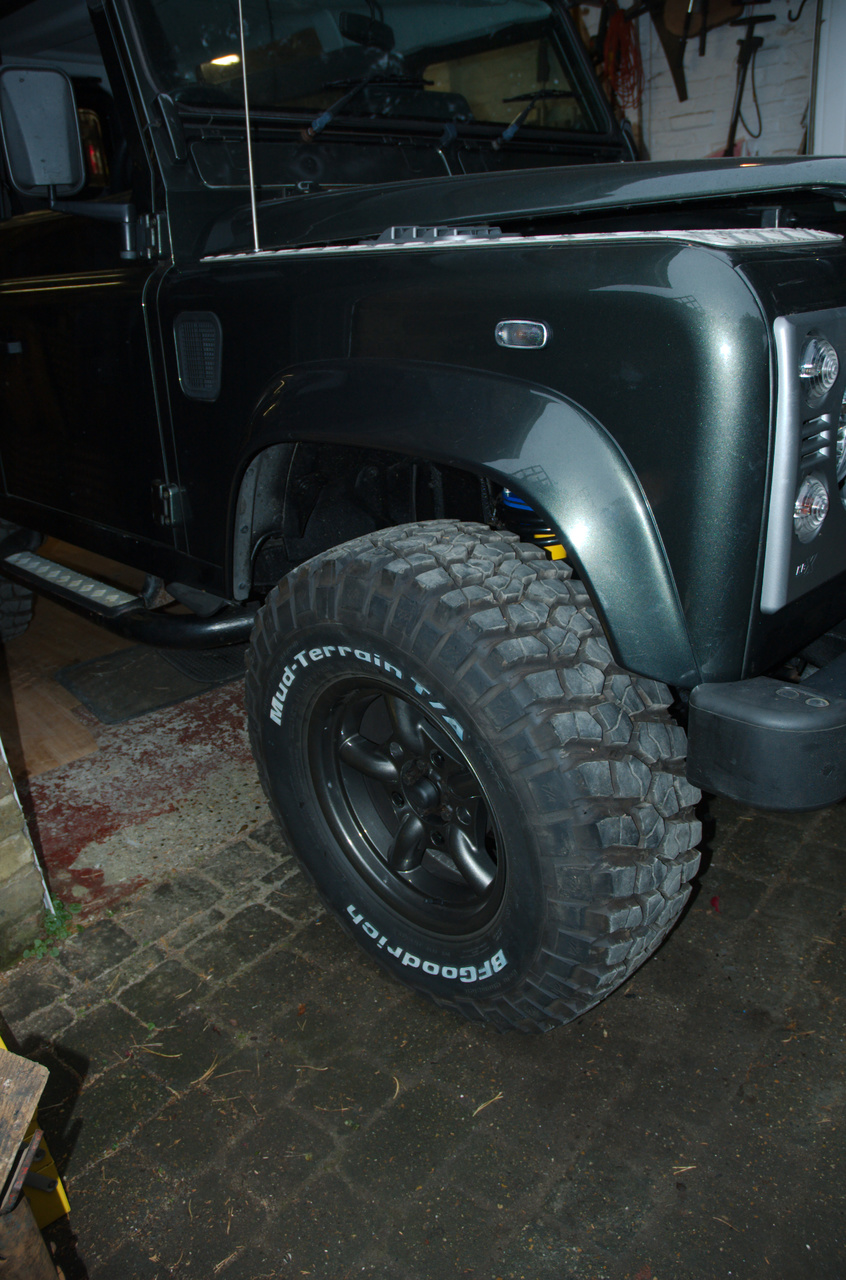 to that which was yet to be done: 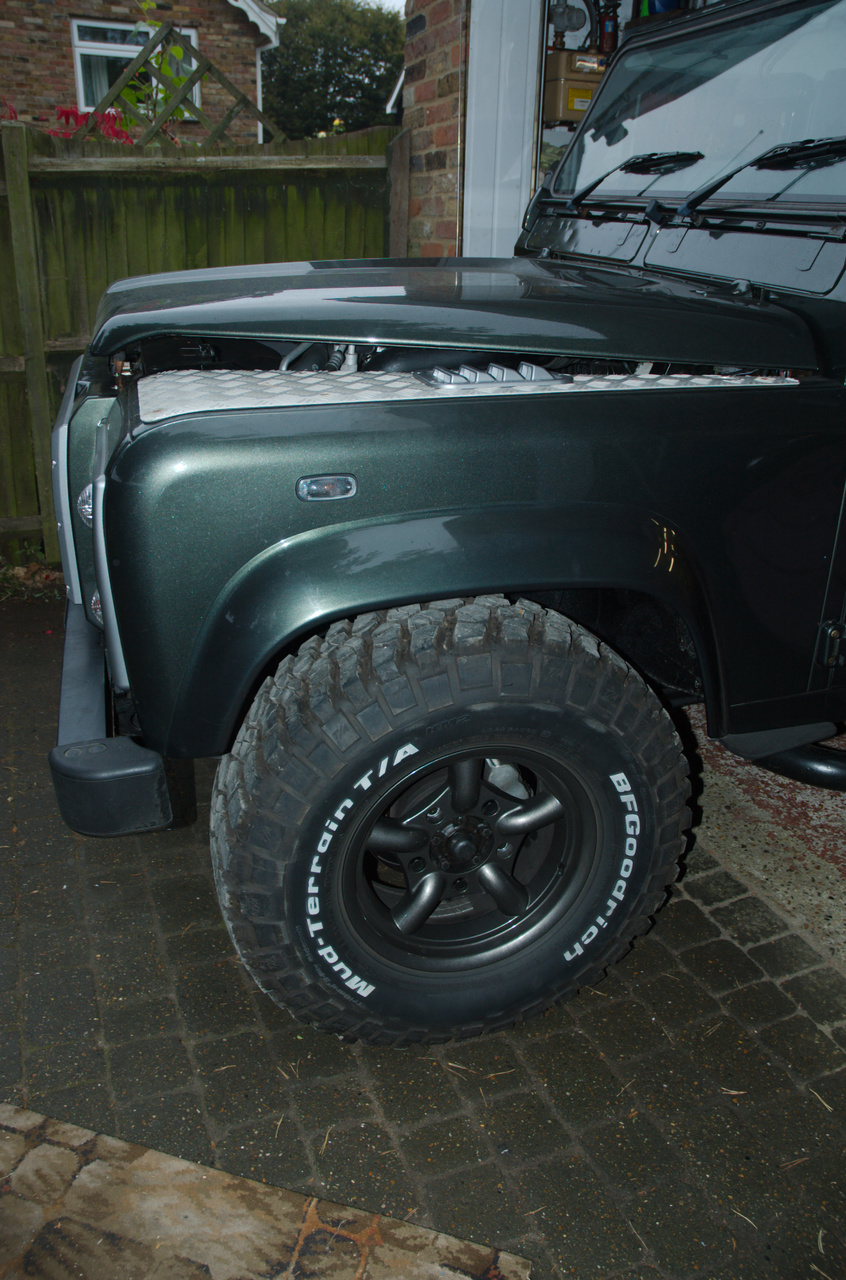 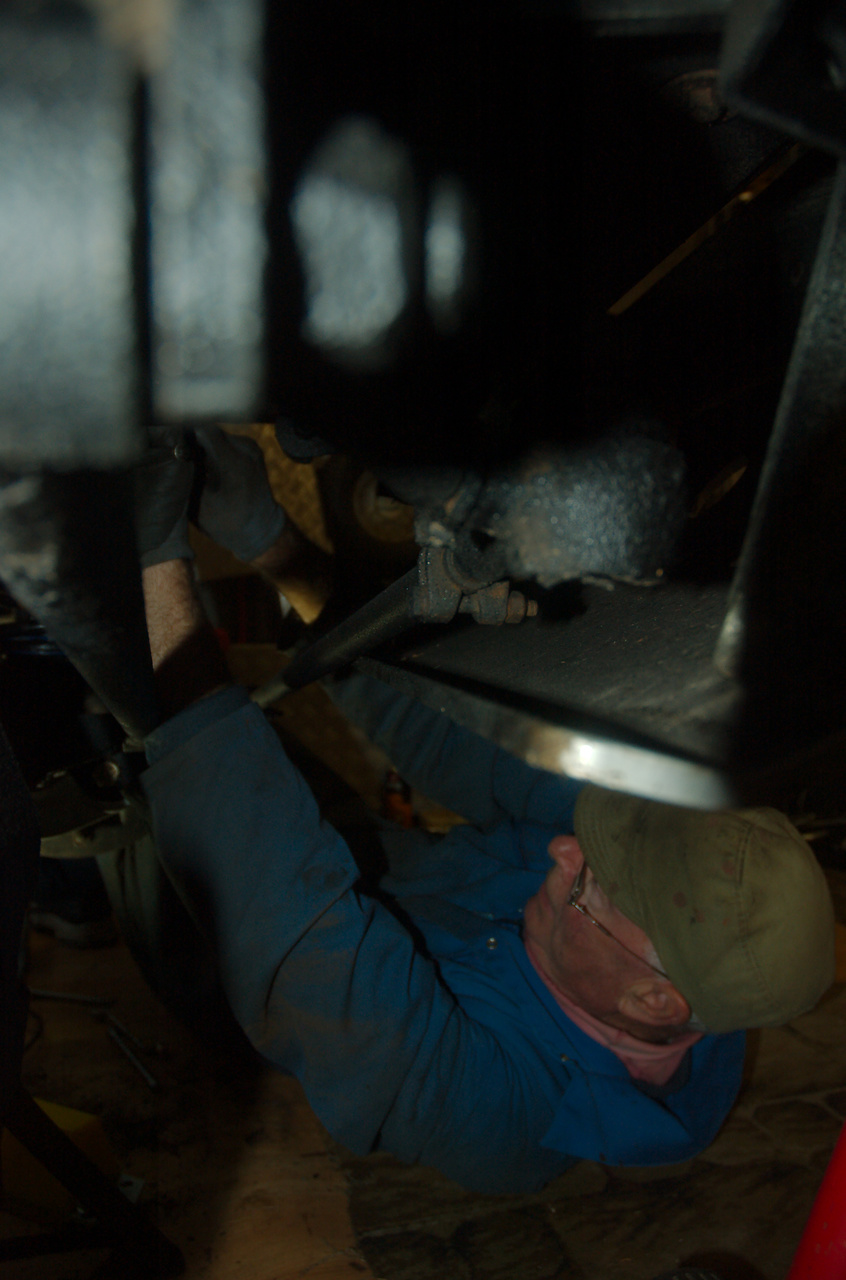 I'm still not entirely sure why this problem surfaces after raising front - unless it was related to the castor corrected front radius arms. For the moment we have removed the guard - its simple enough to cut half an inch off the front but will make a mess of the powder coating.

The old bump stops were also remarkably tricky to remove - the top and button nuts which held it in place being of different size - the top of which was prone to rounding off as you could only use a open ended spanner to hold it. We ended up cutting them off with a angle grinder/Dremel. Thankfully the new ones are just a plain 13mm nut and bolt arrangement. 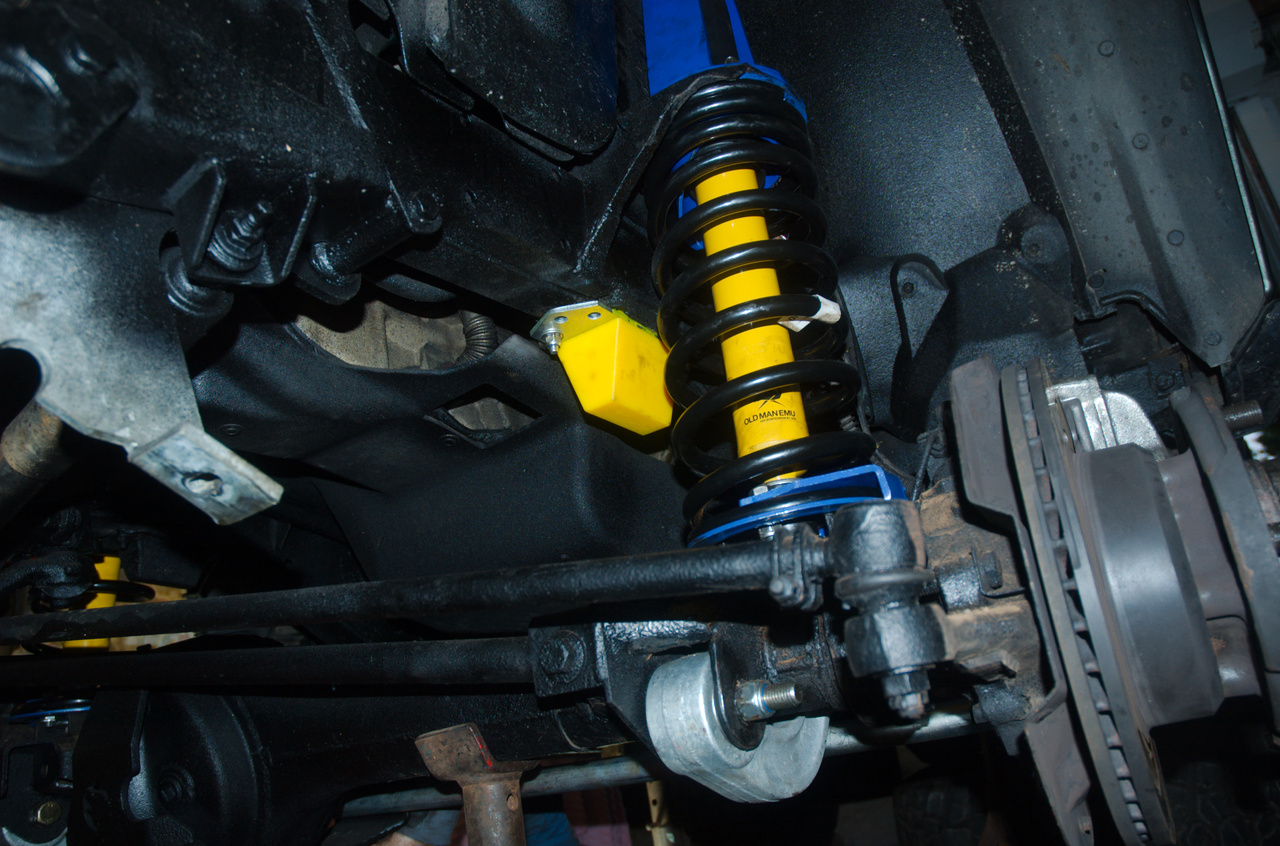 Next day we were onto the rears. There are 2 shock 'cups' fitted to each side which much be removed. Gwyn's documents helpfully suggested drilling the spot welds out - which would be fine if there wasn't 10 years of rust covering them up. Thankfully a chisel was equally effective: 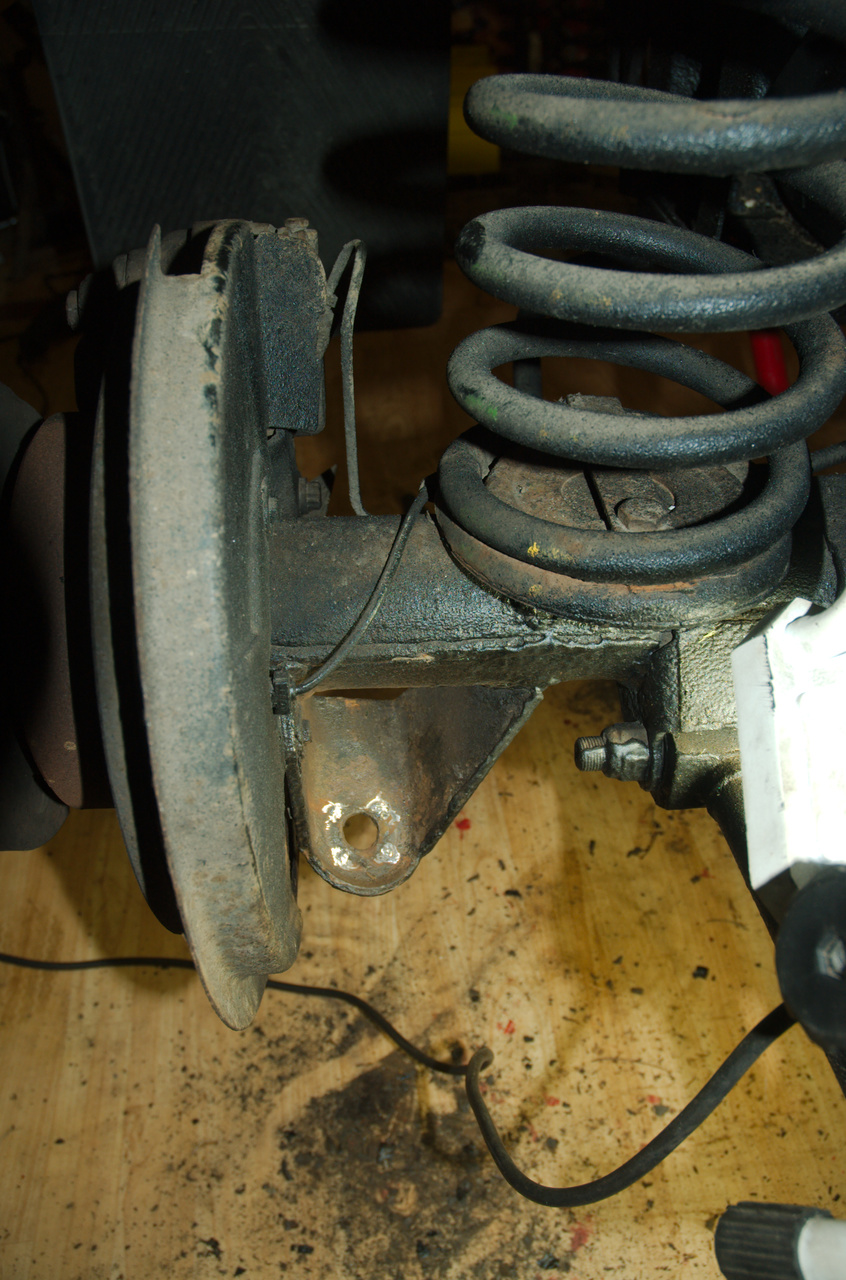 then onto my most feared part of the job - relocating the fuel filter. In their wisdom, Land Rover had decided that putting them in the wheel well was a good place - because there is no dirt thrown up there right? Extended shock mounts for the 90/110 interfere with its position - so it must be moved forward. Note also that the original shock top mount is dropped in favour of a front style shock through hole type. 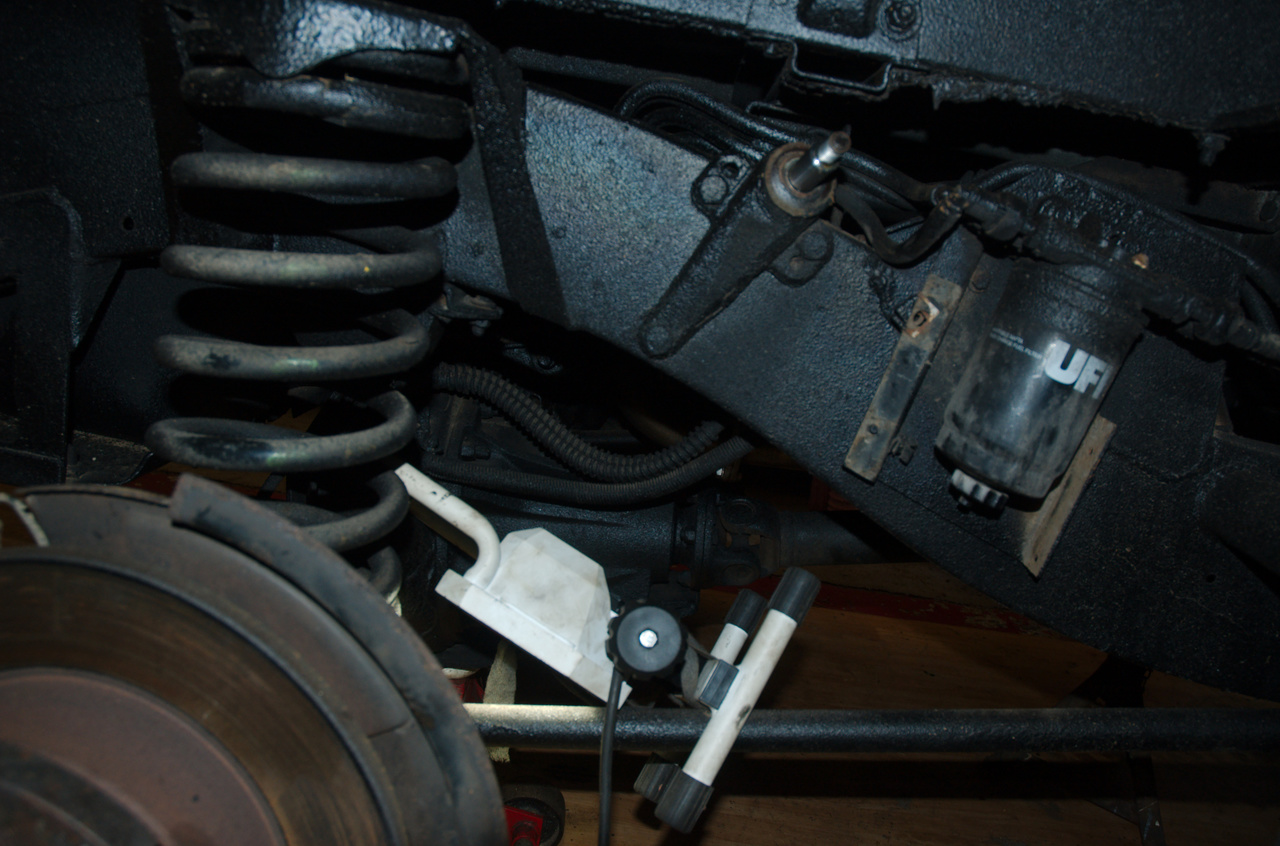 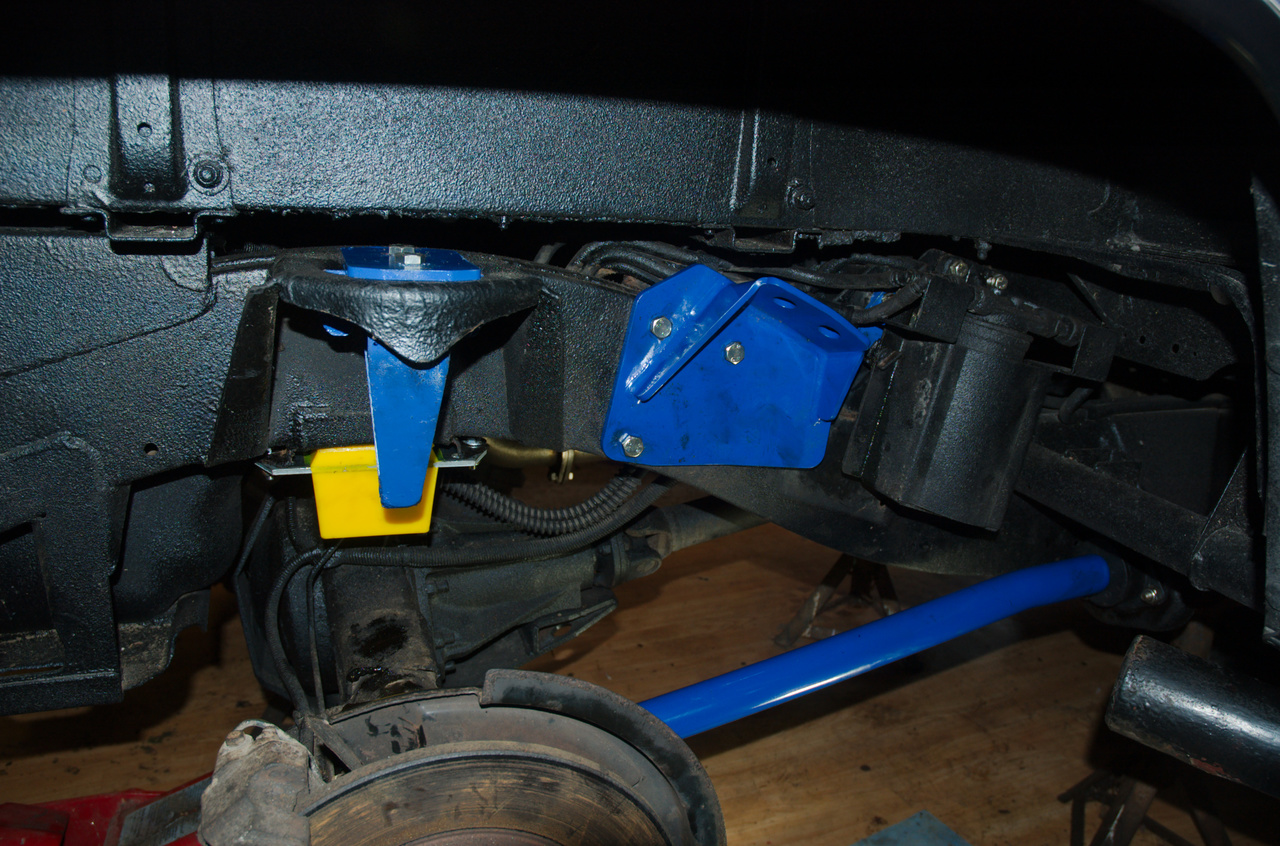 A phone call to Gwyn told me that the front shock hole was for 'ultimate off road' articulation - the rear for the better road holding. Right that'll be the rear one for me then...

The other side was simpler with no fuel filter to relocate. 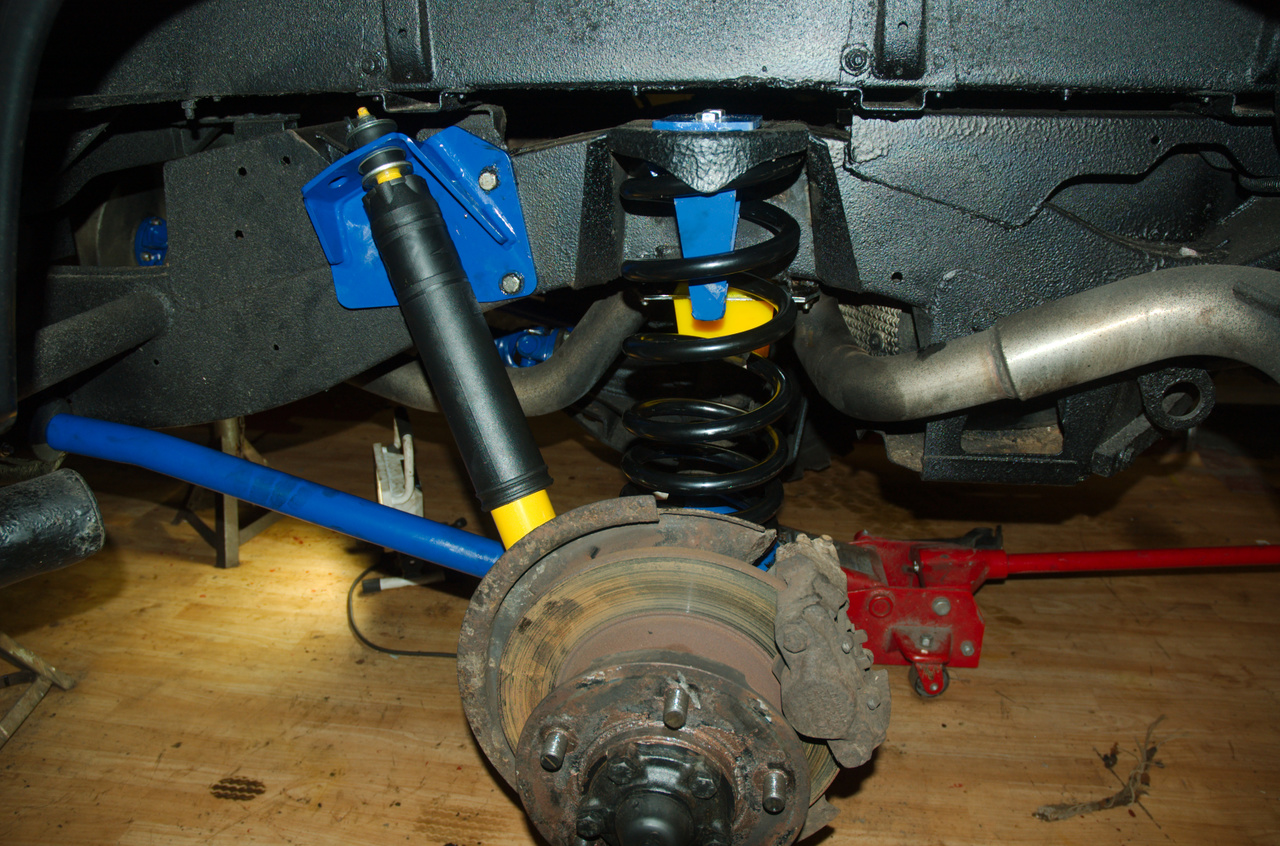 All that was left was to fit the heavy duty front and rear prop-shafts. 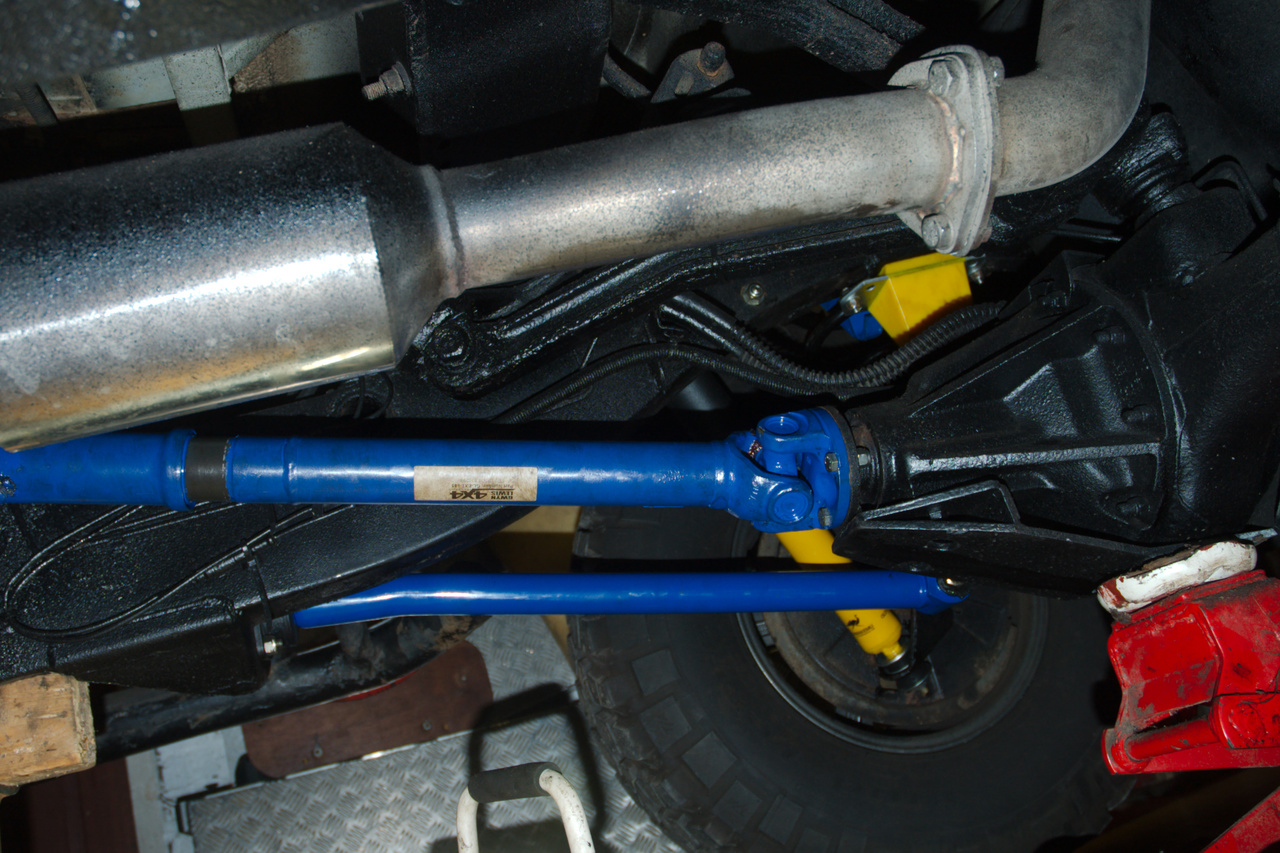 I also had a new top mount/a-frame ball joint to replace, but we decided that this was probably left to the garage with a four poster lift. Job done! 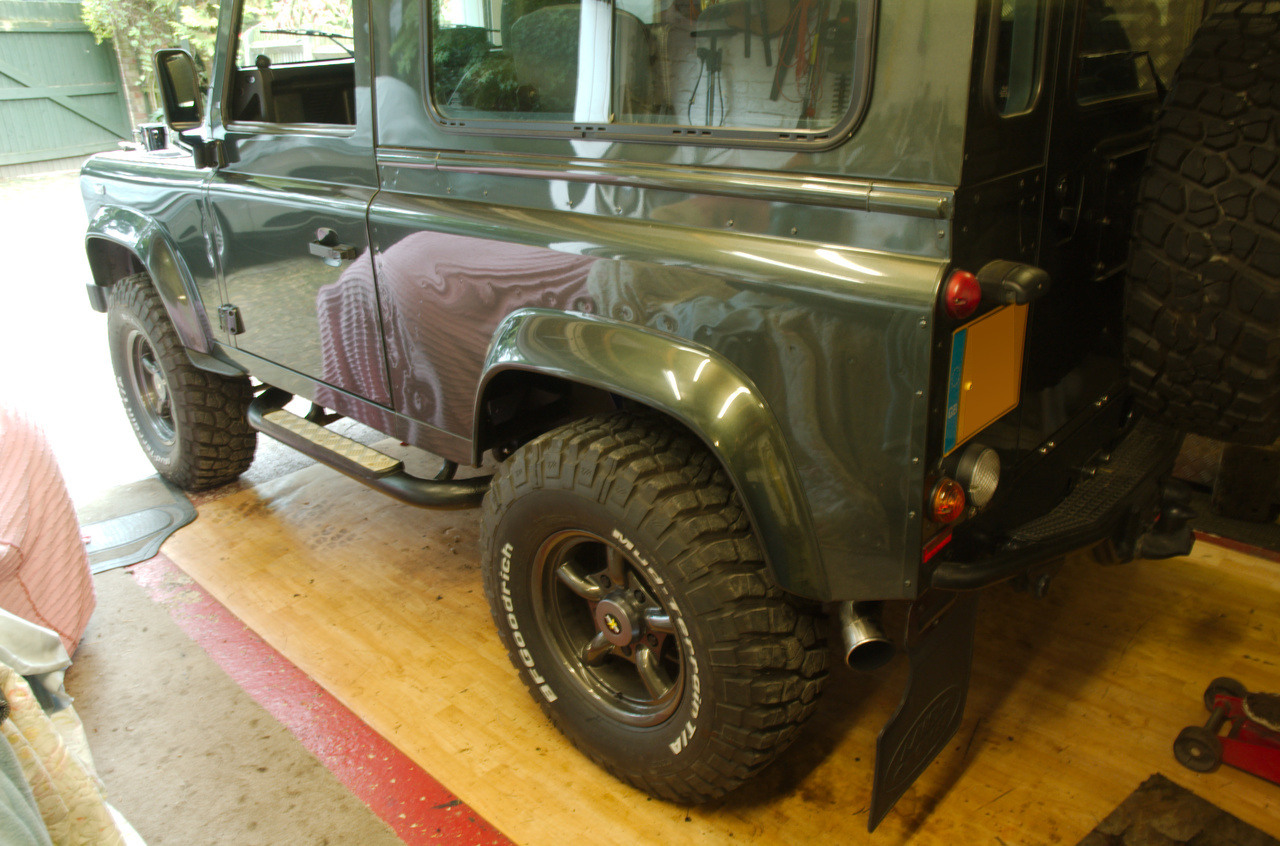 We had replaced the drag link with the first part of Gwyn's "Sumo" kit - but again decided to let the garage fit the rest.

A test drive showed no adverse effect of the lift other than as expected a bit more body roll due to the higher centre of mass. A job well done!