An "Alive" Intercooler had arrived which needed to be fitted. How hard could it possible be I asked myself? 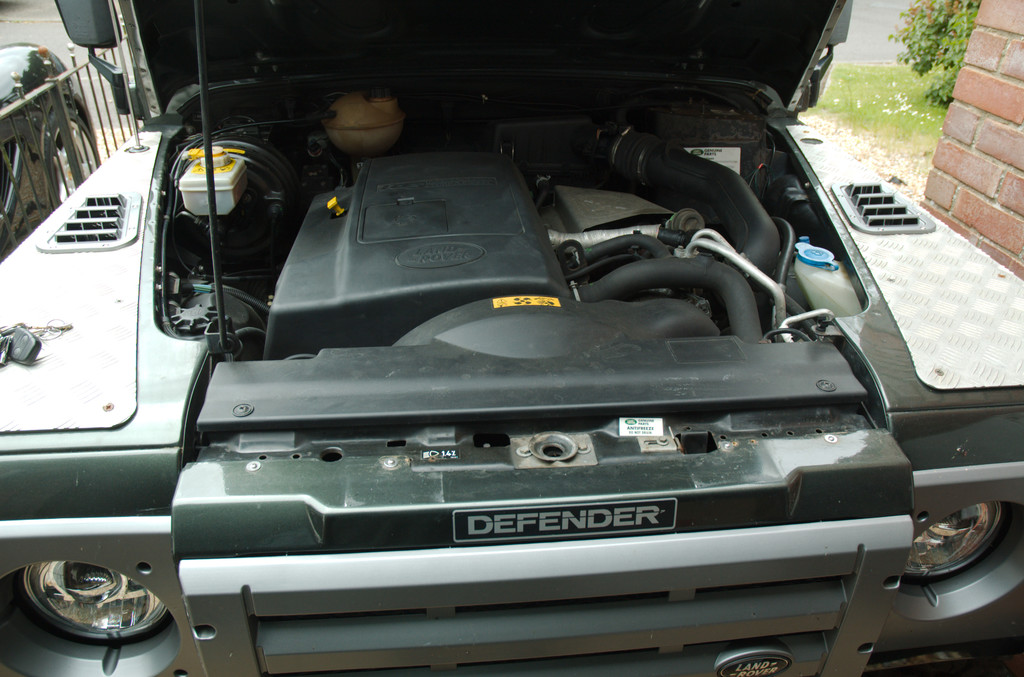 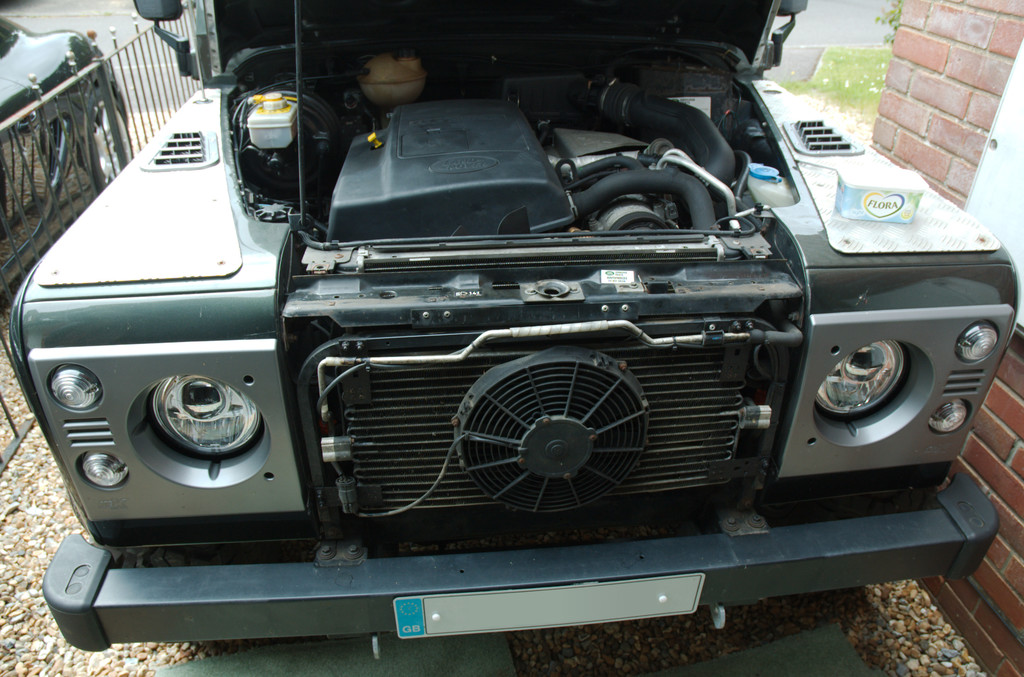 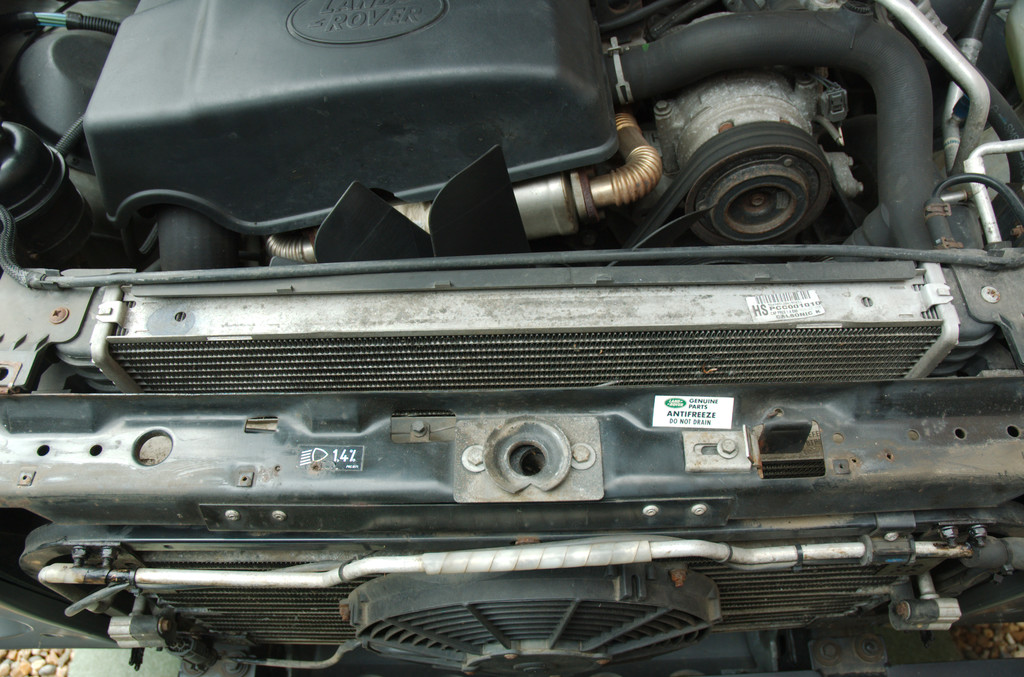 You can se it here sandwiched inbetween: 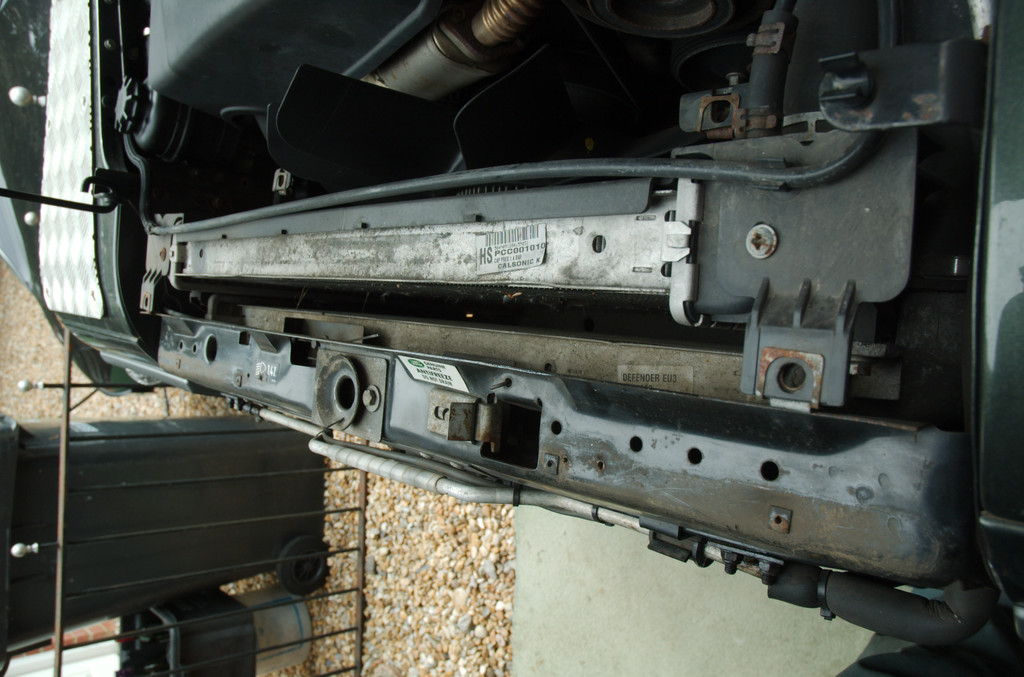 Getting the old one out isn't too hard. Undo the top slam panel... 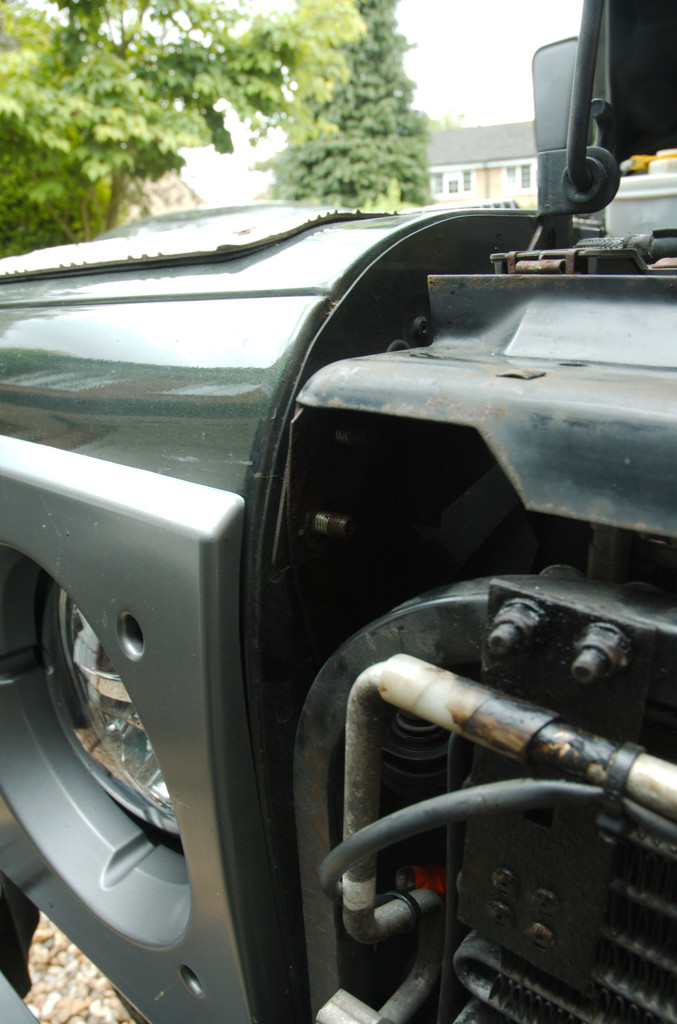 Things will then be a lot clearer to see. 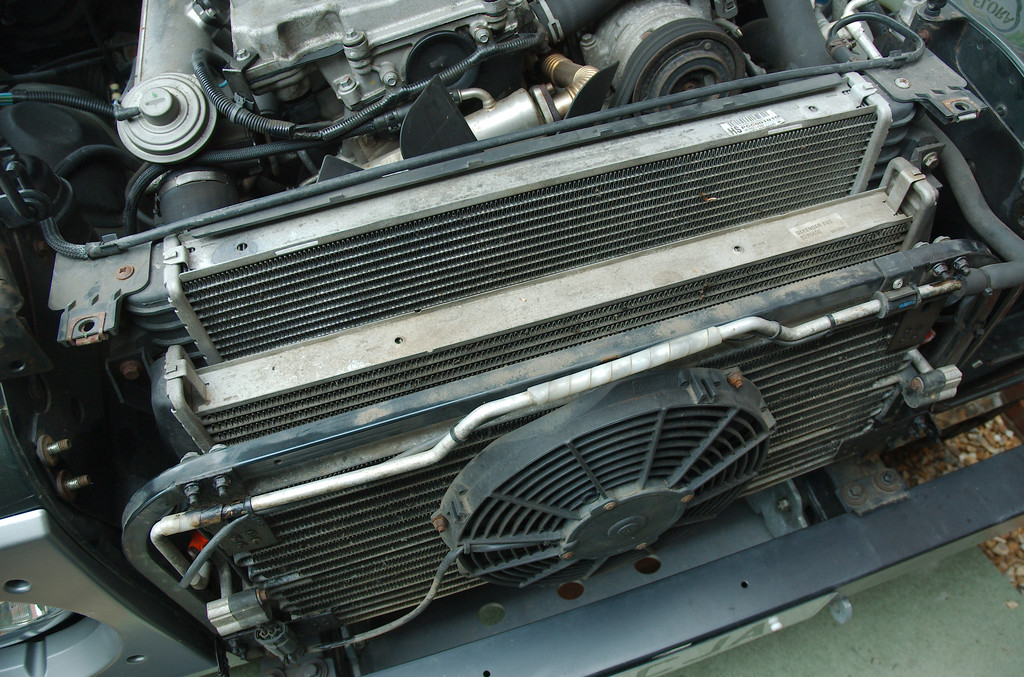 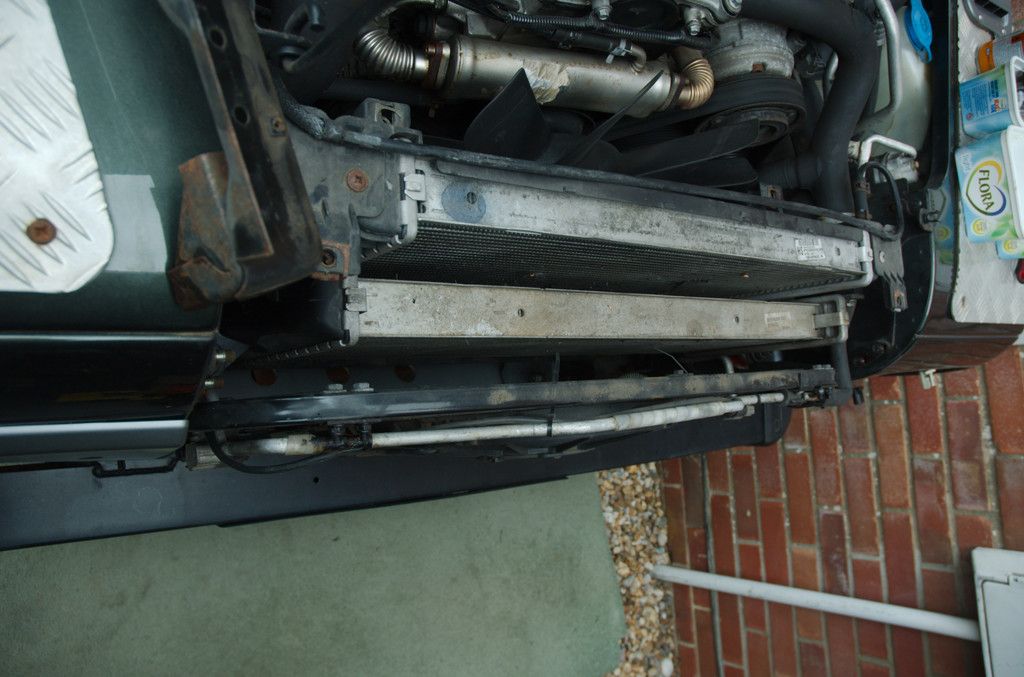 The intercooler pipes are attached with jubilee clips, which will likely face into the wing, as they are apparently attached with the wing off the vehicle. Undoing them is non-trivial due to the limited access with the wing in place, just take it slow with plenty of cups of tea. 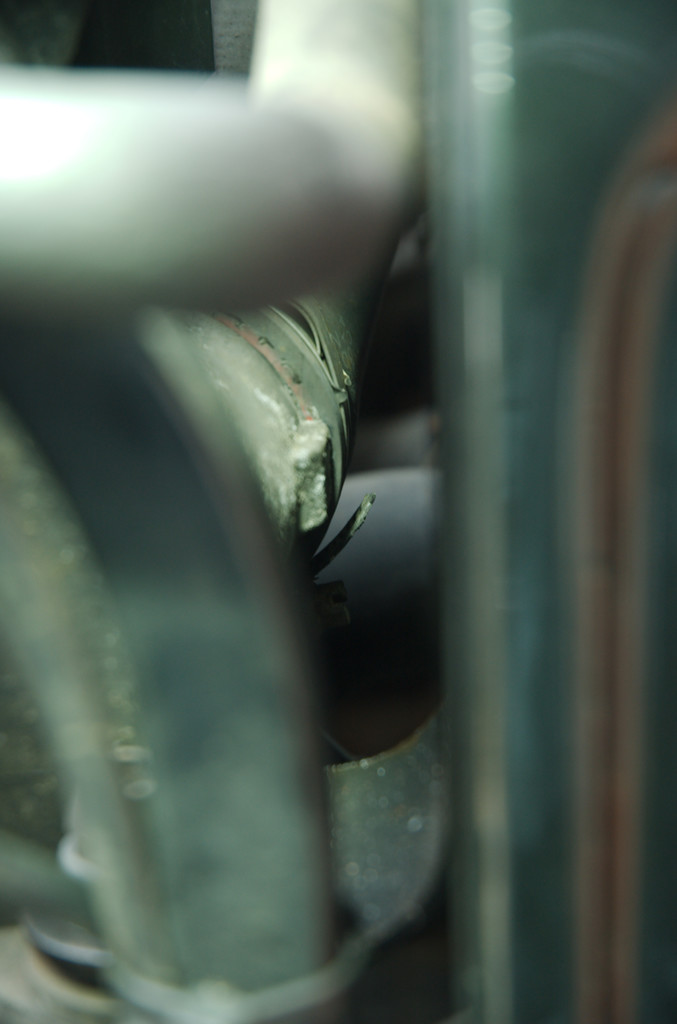 I was then dumbfounded for quite some time to work out how on earch the intercooler lifts out, as it is attached like a seemingly impossible puzzle. Some internet surfing revealed that the studs need to be extracted from the end plates. Don't try and unscrew these hidden captive plastic nuts hidden inside the wing with a spanner. Why make them spanner shaped then!?! 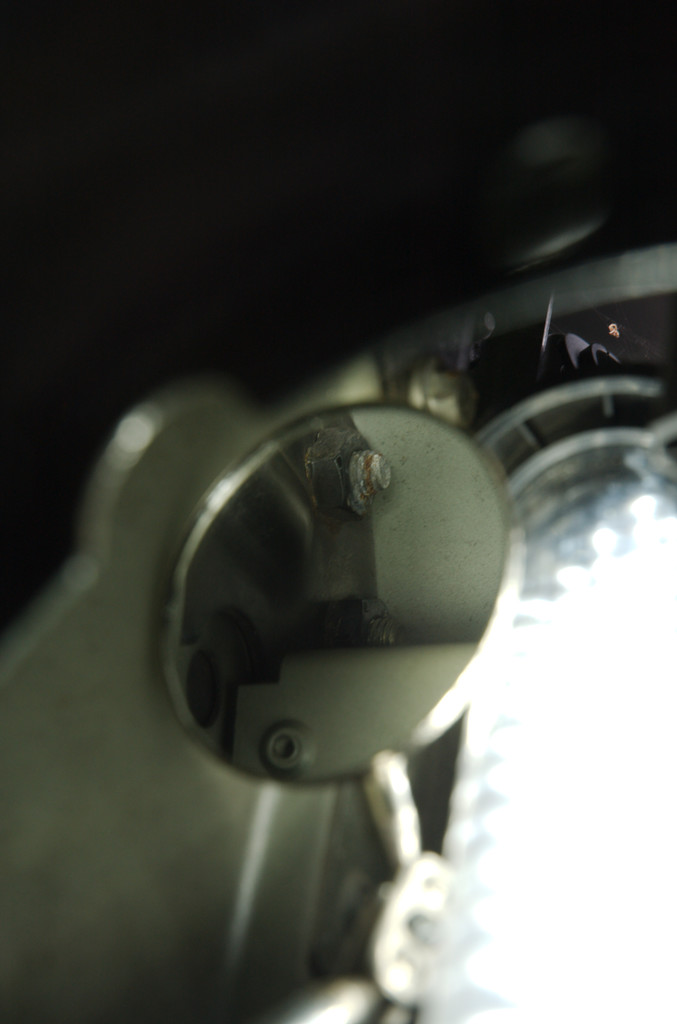 Instead simply wind another nut onto the existing one, and undo as a pair bringing the stud with it. 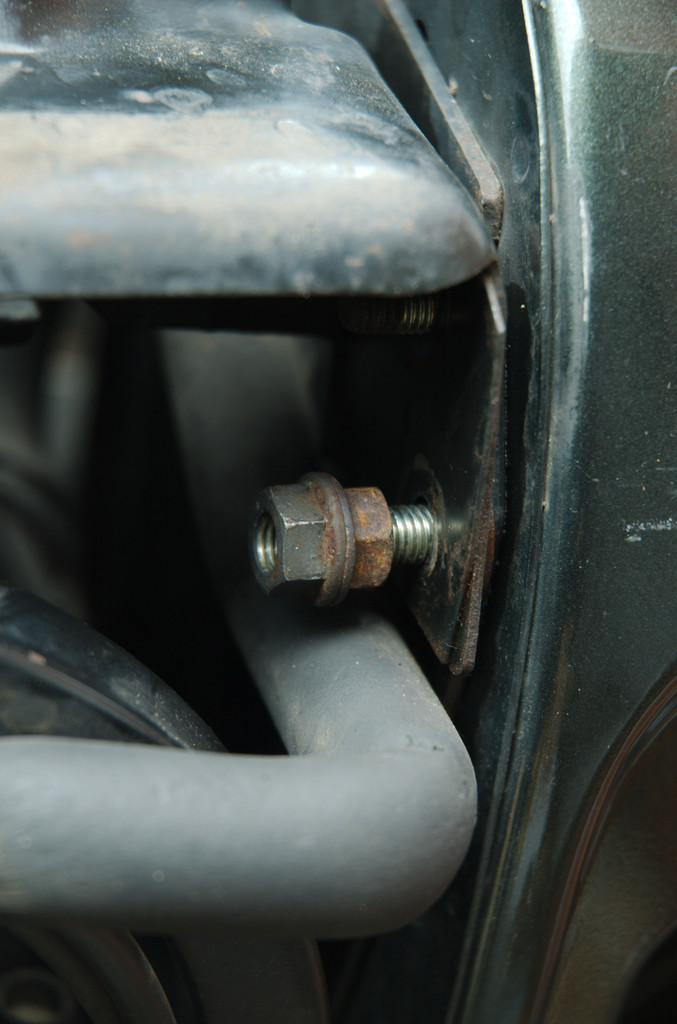 Repeat at the other end. 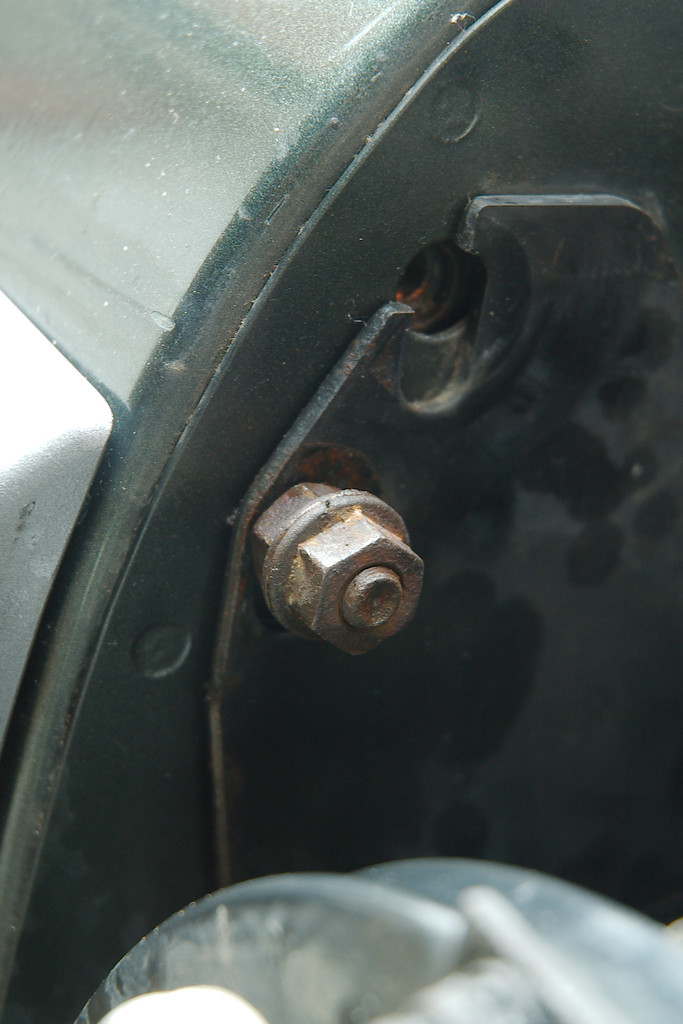 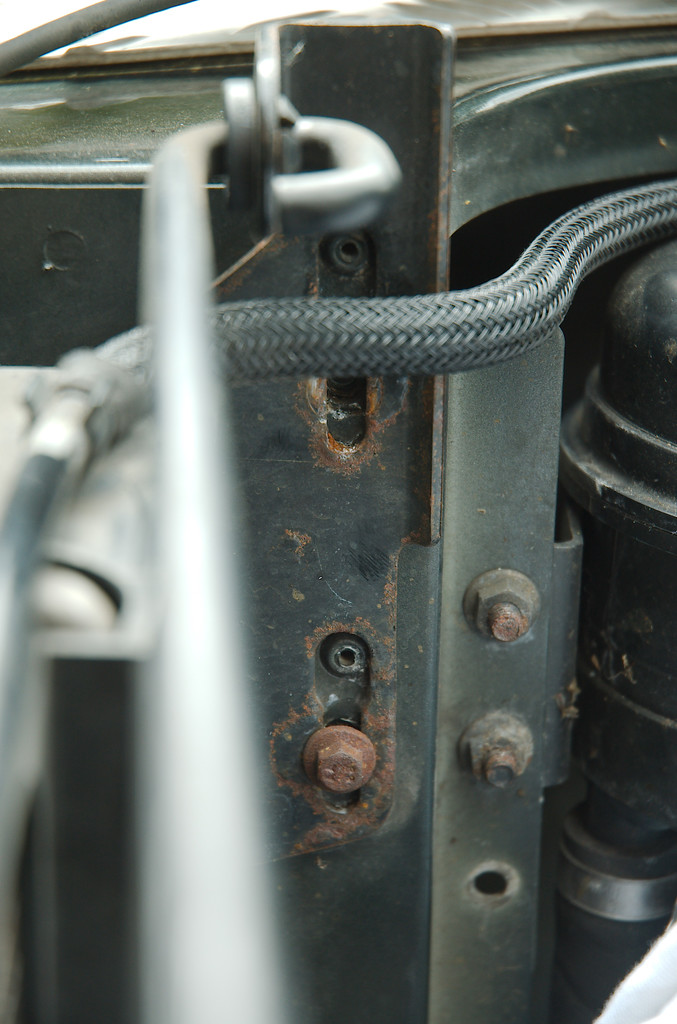 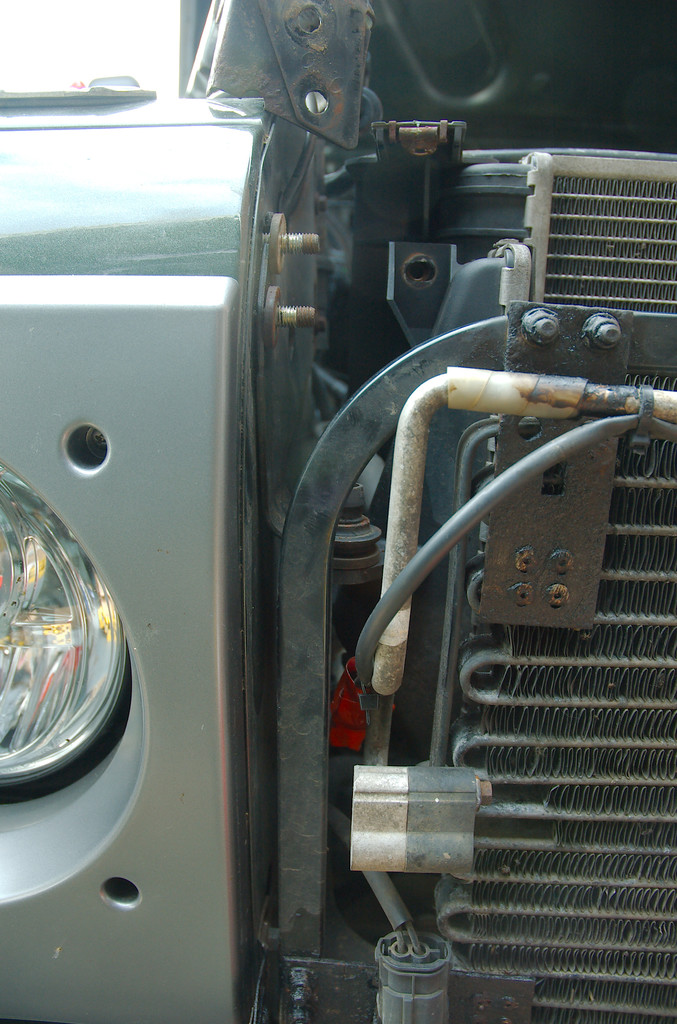 until the entire bracket at both end can be lifted out, at which point the intercooler can be removed. 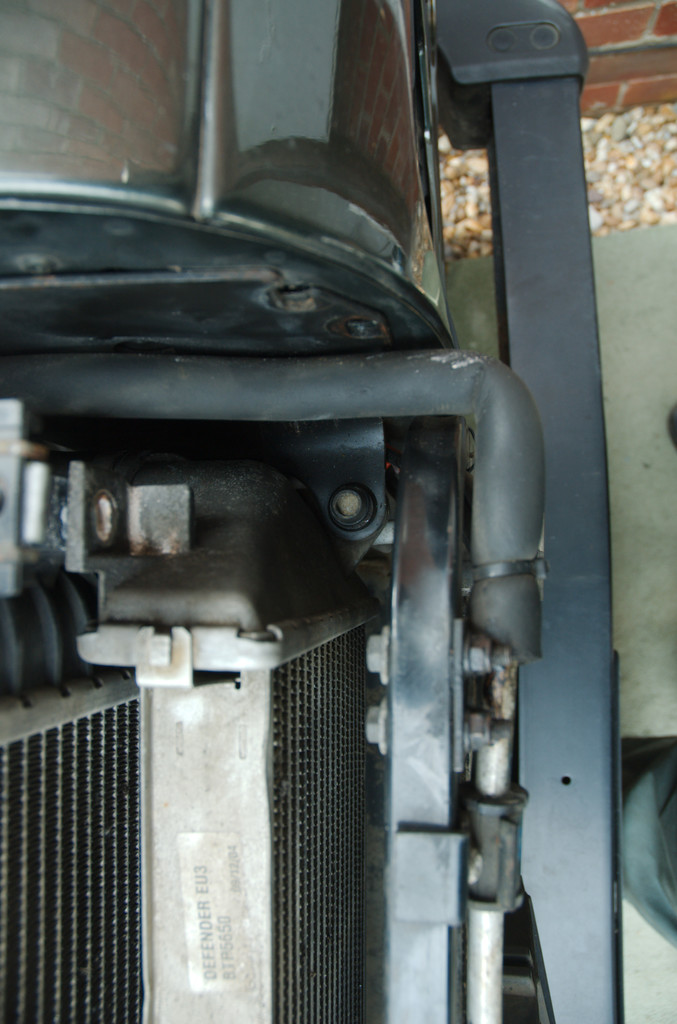 Now to put the new one in... Same as reverse right? 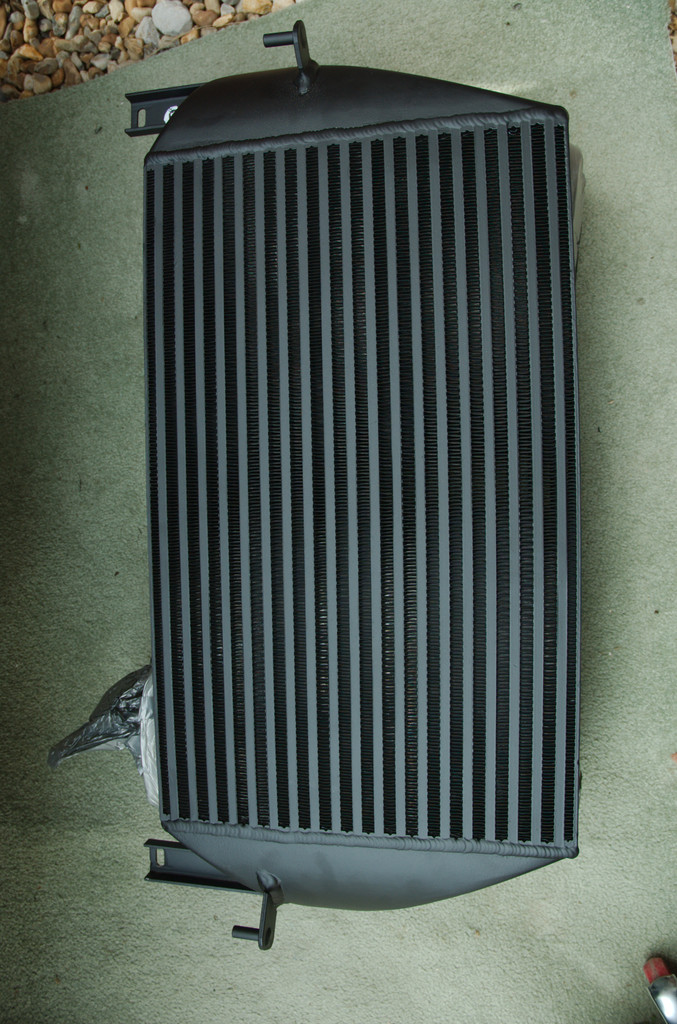 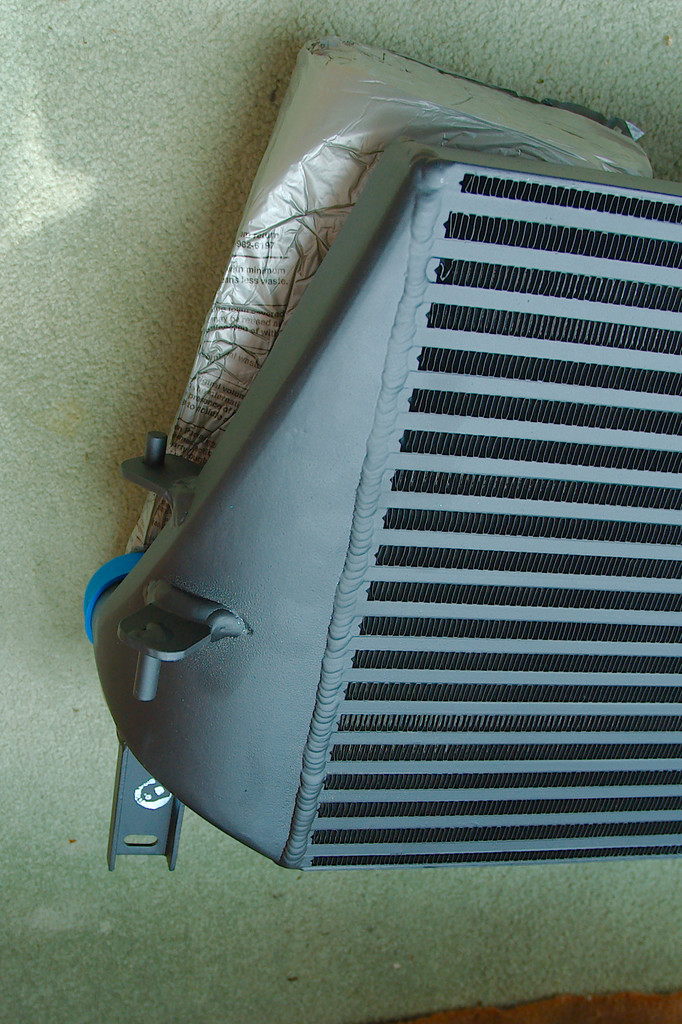 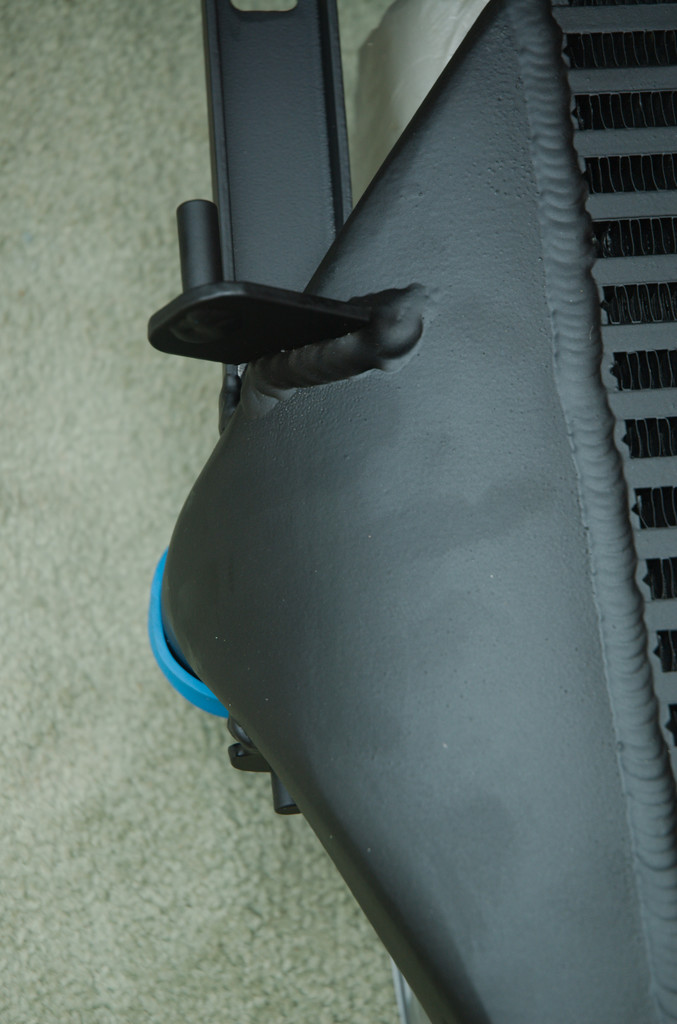 The new one is much larger than the factory original, seen here side by side for comparison. 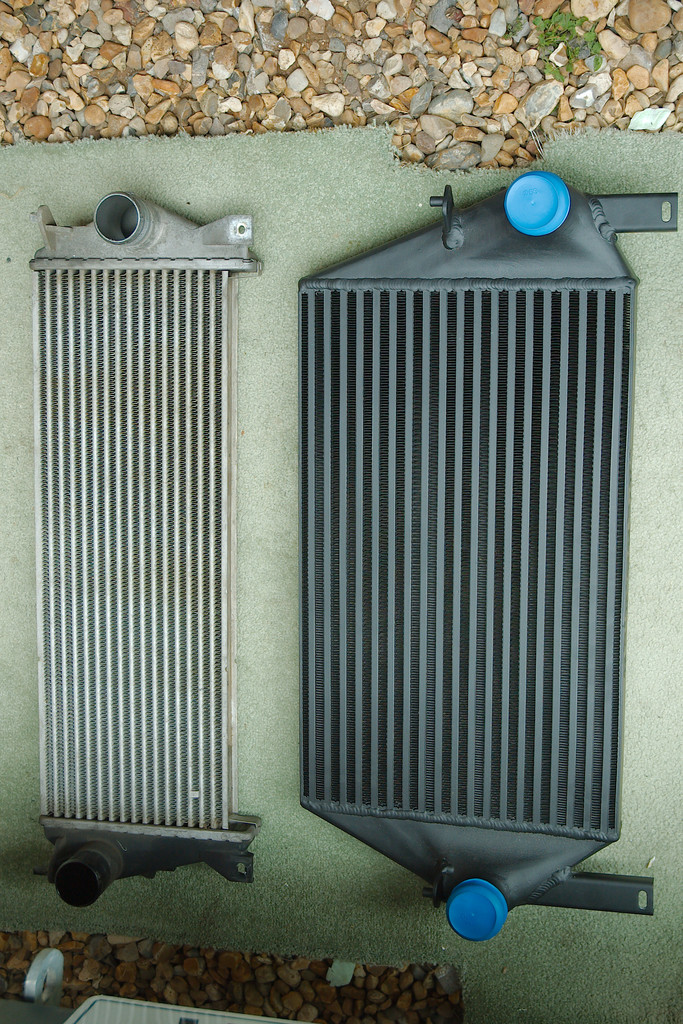 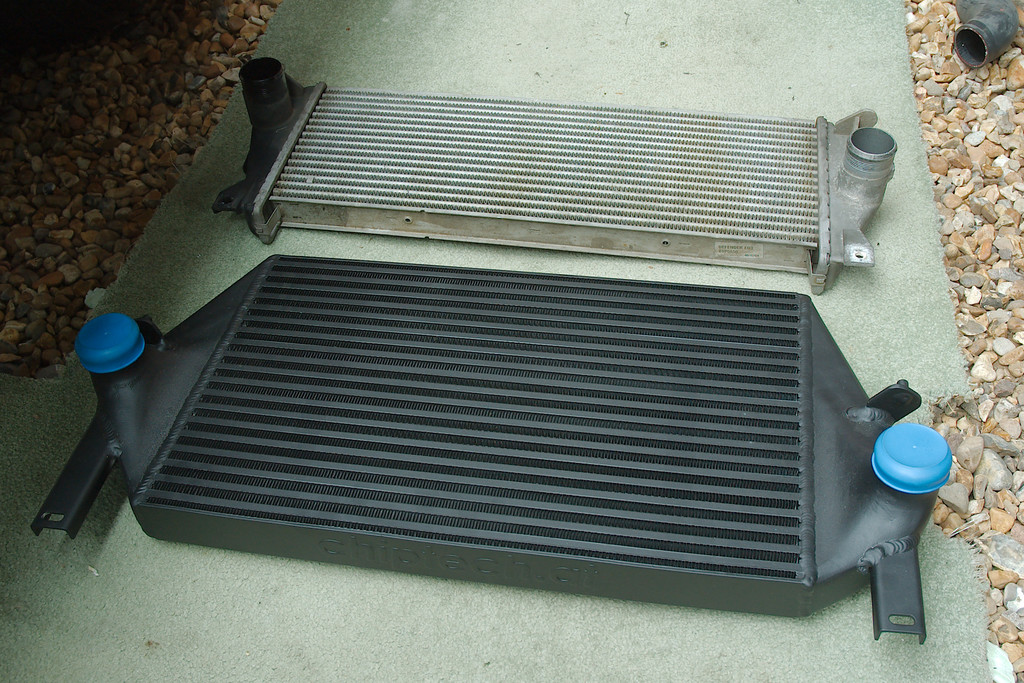 The water radiator will rock backwards just enough to fit the new intercooler inbetween - taking it very gently of course! 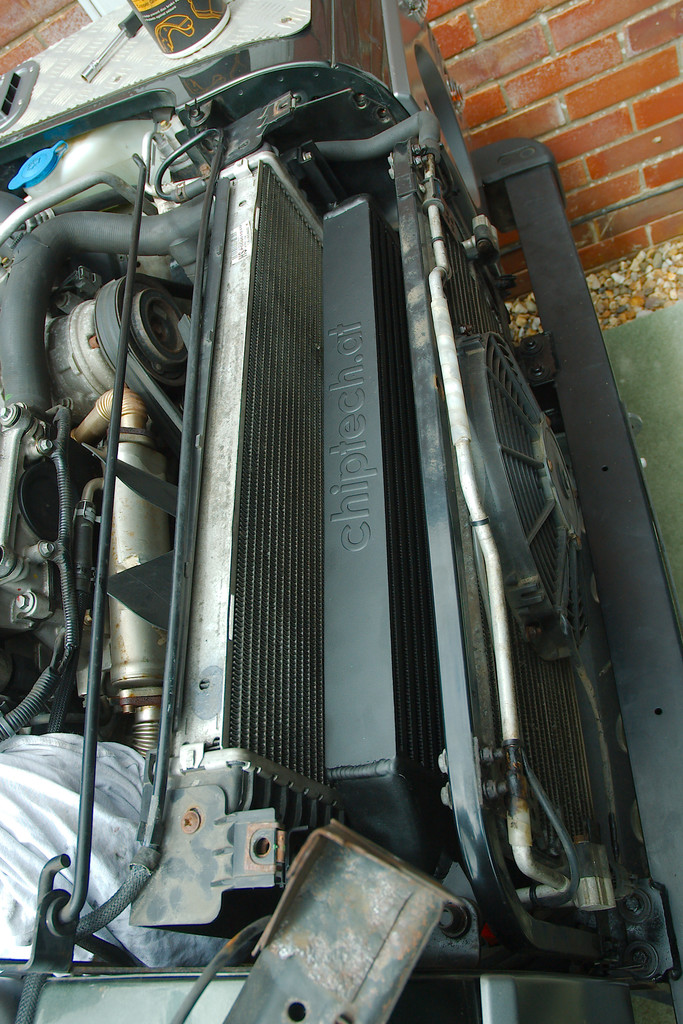 ... and then we come to my nemesis. Fitting the pipe onto the intercooler. It can't be done before its installed - so must be done after (well at least I can't see how else you can do it). Much internet surfing later revealed that yes, this was tricky with the air con pipes in place - I had to push the silicone pipe over the tight intercooler tube, without my hands getting anywhere near the actual intercooler due to lack of access!

I since learnt that the trace removes the air con radiator to fit it before hand - a luxery I don't have at home without being able to degas and regas the air-con circuits. 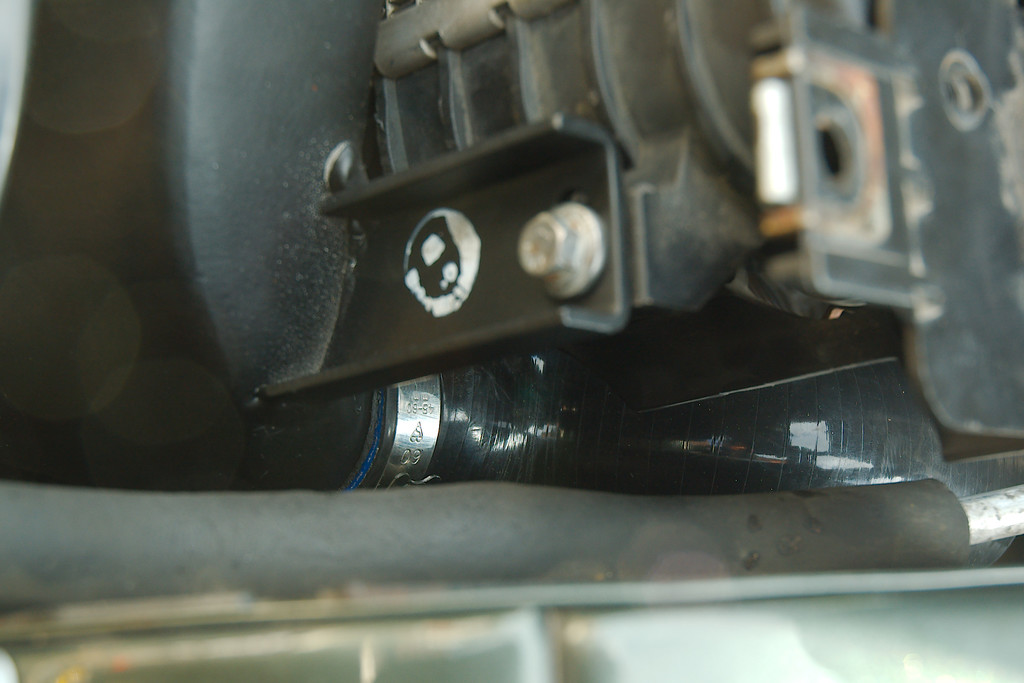 Remove the turbo air intake pipe to give yourself maximum access. Then swear. A lot... 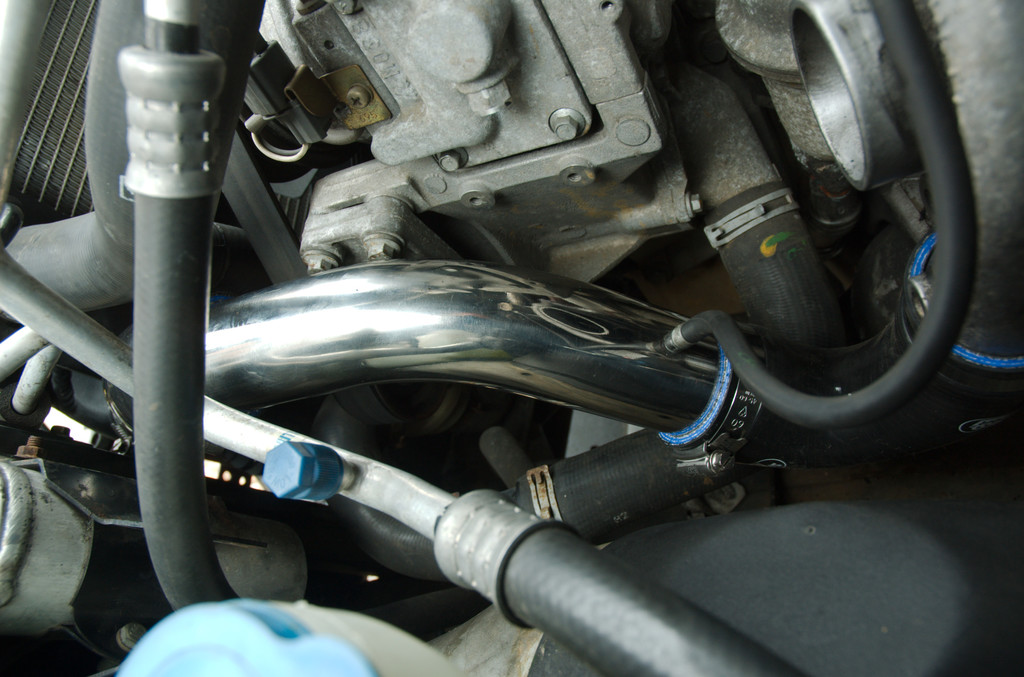 Eventually I got it on though. 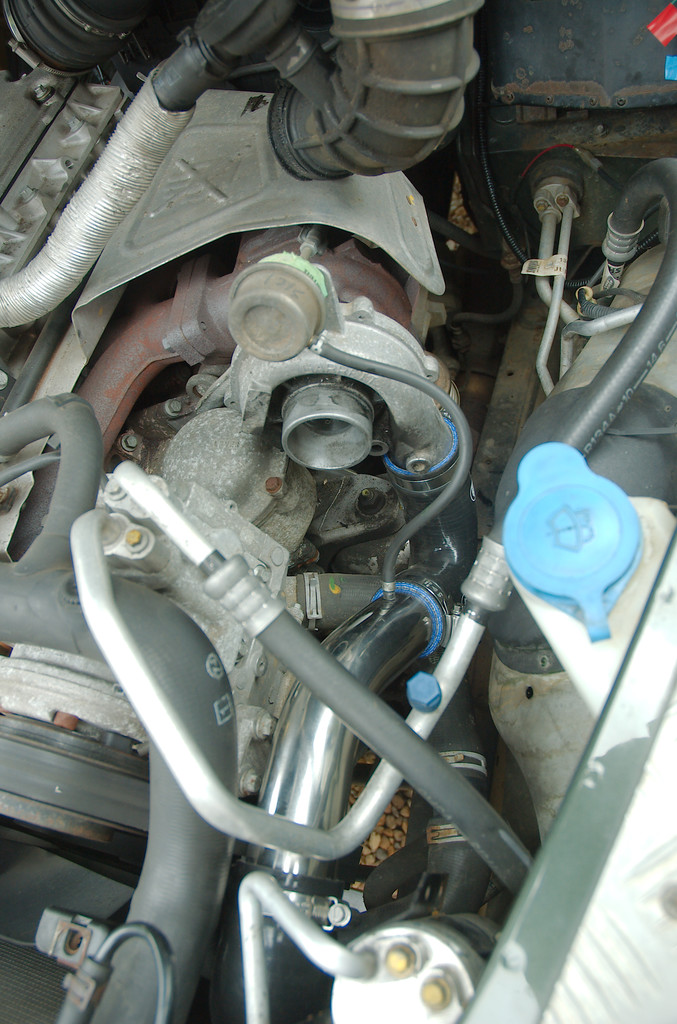 Without a remap - the difference in driving was negligable, so don't go expecting this to make a difference by itself.

Reattach the slam panel, and job done! A job I never, ever, ever want to do again.